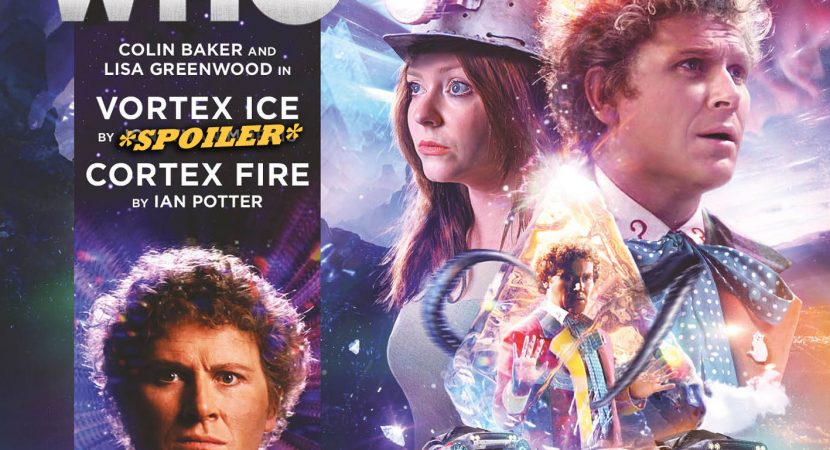 Sometimes, one just wants a straightforward classic Who adventure without any fancy narrative structure, overwhelming angst or deeper meanings for the Who franchise as a whole. Cortex Ice isn’t fancy, but it has clever worldbuilding, guest characters just engaging enough to care about, and opportunities for both the Doctor and companion to fall into loads of trouble and climb out again in a suitably heroic manner.

After their last adventure, the Doctor wants to take Flip somewhere fun. For once, he succeeds, although his idea of fun and hers differ. But of course, they can’t just land on a nice, quiet planet to take in a show. The futuristic city of Festin is facing a rare crisis, and the Doctor has unerringly landed a few hours before matters come to a head.

Citizens are suffering attacks from a terrorist organisation they’ve dubbed the “Nihilists,” although the Doctor is not entirely convinced they exist. The truth turns out to be more disturbing and more complicated than even he suspects.

This one-hour story has only bare-bones guest characters to move the narrative along and reveal the peculiarities of this world to Flip and the Doctor. There’s Khoralla, who’s quite sure her musician partner is not a terrorist, an engineer named Halus who was having a bad day even before the Doctor barged into it, a physician named Dakeem who’s in a position to know more about the Nihilists than most, and the Cortex, your typical worldwide computer network with a voice interface.

Tiny cast, eh? But there’s nothing less than the lives of the entire population at stake. The Doctor, Cassandra-like, tries desperately to warn the citizens of impending doom, but is having little luck, and doesn’t know the whole picture. Flip, meanwhile, isn’t waiting around for the Doctor to sort things out before she starts trying to rescue people. She’s braver than she is sensible, but luckily she thinks quickly on her feet. She really can do almost as much as the Doctor boasts.

Author Ian Potter has taken some real-world scientific discoveries and extrapolated them for his worldbuilding, coming up with an original SF society. Add a dash of Jungian psychology and Gallifreyan mumbo jumbo, and stir. The result is intriguing and terrifying.

Saving a planet is never easy, and this time it’s an especially tall order for the Doctor. Luckily, he has Flip to help him.

… or does he? There she goes again.

But when they are together, their easygoing banter is a harmony of opposites. Flip brightens the Doctor’s aged spirit, and he steadies hers.  There’s time for a few really good character moments between them. He often tries to conceal the worst from her, but she usually sees through him and calls him on it.

While the last double-header was two closely-related stories with the same antagonists, this time the “ice/fire” stories pretty well stand alone. The first story in the set gave the Doctor the motivation to come here, and both stories deal with what one can or cannot change via time travel.  But they could just as well be entirely separate releases.

Warning: If you have a strong aversion to fire, this audio will be rough in spots.

I love all the worldbuilding Ian Potter constructed off a simple premise: this planet has an exceptionally strong magnetic field.

Also, Potter knows that many species on Earth navigate by the Earth’s magnetic field, so he posits that on a planet with a strong magnetic field they all have “lodestone” sensitivity. He extrapolates that this allows sentient beings to sense one another, and to hook into a worldwide computer network (the Cortex) that enhances that sensitivity into a limited form of telepathy.

Which Potter links with Jung’s controversial idea of the “collective unconscious”: common impulses, feelings, symbols and archetypes that are shaped by experiences common to most people (e.g. aging, birth, sunrise and sunset), and which tend to give rise to similar myths. In this fictional world, everyone’s unconscious minds are connected via the Cortex, so it really does influence their thoughts, feelings, and folktales.  Khoralla mentions stories with common themes several times, observing how certain symbols and impulses (self-sacrifice, melancholy) are profoundly meaningful in their culture.

Which is all very well, but every story needs an antagonist. In this case, an extradimensional being has nudged their civilisation into giving it what it needs to rip a hole in reality and let it return home.

Too bad the Doctor couldn’t find another way to return “The Urge” to its dimension. Punishing it is all very well, but leaving it to the people of Festin to contain future outbreaks sounds iffy. Then again, what planet doesn’t have longterm existential crises like climate change and population growth?

Or solar flares, for that matter. Remember that season 8 story, In the Forest of the Night? It distressed me, because the Doctor and Clara played spectator while a solar flare hit the Earth that was powerful enough to kill the astronauts aboard the International Space Station (not to mention short the world’s energy grids.) Cortex Fire handles solar mass ejections a little more plausibly: a stronger magnetic field could deflect more of the star’s output.

Worldbuilding aside, I loved Flip’s gung-ho rescues— she even rescues the Doctor!

After so many “there should have been another way” stories lately, I’m so grateful to hear an adventure where the Doctor wins. Not for all time (see above), and not by protecting everybody, but by risking his life to do something clever and heroic to save the planet. It’s a bit wild that the TARDIS can practically turn herself into a reverse black hole to do the job, but it’s a neat trick.

He tries to hide it, but Six probably spent something about a year torturing himself and the TARDIS, or even longer since time does strange things in the presence of an intense gravity field. (We won’t ask how he survived.) Brave Doctor.