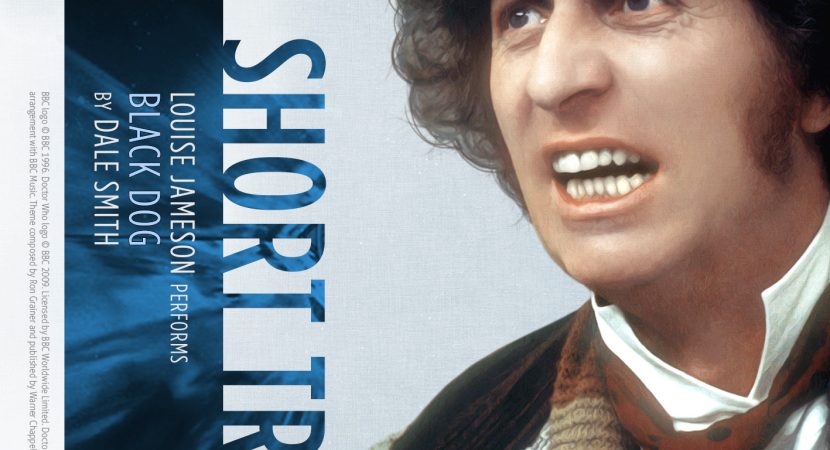 A ghost story about a “black dog” puts Leela in a fight for her life against yet another false god.

Louise Jameson could read a phone book and keep my attention, so it’s a little hard for me to be objective when she narrates. But this is a spooky, thoughtful, low-action, character-driven story which plants us vividly on a dark and dreary planet beset by a demon. Our fondness for Leela, who falls afoul of its curse, makes us more sympathetic to the locals’ plight.

On yet another colony world exploited by the Earth Empire, the natives are finally getting their world back, but it seems to be a pyrrhic victory. The Doctor and Leela encounter one of the last colonists to ship out, pillaging the bones of empires and trying to sell the scraps for a bargain. The natives are a worrisome caricature of lazy indigenous peoples, a common stereotype invented by conquerers to excuse their abuses. But in this case, there is a good reason for their lethargy.

Black Dog is one of those 1970s-era Who stories that flirts with the supernatural, like Image of the Fendahl, or, really, Face of Evil, since that one involves a lot of mind control.

For most of the audio, Leela is a fairly passive figure. The Fourth Doctor takes centre stage, investigating the Black Dog (once she convinces him there really is something to the legend) and chivvying people along with his humour and magnificent turns of phrase. But Leela becomes vital for the climax. I enjoyed her moment to shine.

In fact, I enjoyed the story enough to relisten several times, which is easier to do with Short Trips. I loved the rain, the mud, the listless froggy aliens, and the incidental music (which adds mood to most Short Trips, but this time it was especially good).

It was only when I came to write this review I realised what was niggling at the back of my mind: white saviour syndrome. It’s actually a pretty common problem across Doctor Who, but I was primed to notice it by the aforementioned stereotype. On the flipside of the same coin, what I first noticed about this story is that it’s a parable about the damage caused by imperialism and colonialism, which the UK is still coming to grips with.

Bottom line, it’s a thoughtful story beneath the surface with a few problematic elements, it’s got Louise Jameson reading it with her usual talent, and the characters, setting and dramatic conclusion carried me along just fine as a listener.

I’ve got a lot to say about this story, actually, because of my training in mythological studies and psychology. But I’ll save it for the spoiler section below.

The basic premise, than an idea takes on a reality of its own and can be strengthened or weakened by people’s belief in it, is a modern myth that’s been repeated in countless modern stories. (“Tinkerbell will get well if you clap your hands.”) It sits a little awkwardly in Doctor Who, which is happy to present impossible technologies like time travel as “real” but usually balks at things that smack of magic or the supernatural.

But there’s something more than just “the power of belief” here, and I assume the author did it deliberately.  And I have to distill a bunch of stuff down to explain it. Joseph Campbell, Jung, and a bunch of folklorists and psychologists have an interesting way of looking at the intersection between myth, psychology, and culture.

First, there’s Campbell’s idea that mythology serves several psychological functions. One is to make sense of the big forces of nature that overwhelm and shape people’s lives: plague, death, old age, birth, famine— they’re terrifying and incomprehensible, and the human impulse is to get some control over something, or at least make it less intimidating, by explaining it. Nowadays we do that with science. In the old days, myths and polytheistic gods made sense of that kind of thing.

Symbols and stories may not make literal sense or be real-world fact, but they distill feelings, ideas, and hard-to-talk about concepts into a more concrete form that resonates with people.  Try explaining what makes lightning to a child. It’s hard, isn’t it, even with modern science to help? It’s much easier to say there’s an angry god tossing firebolts. And that image is a lot easier to remember. It’s a satisfying story, on an irrational, psychological level, even if nowadays we know it’s just a conceit (much like the notion of the Doctor).

In Black Dog, the Doctor briefly alludes to this function of religion/mythology. He says that the black dog is a myth generated in the minds of the natives to explain something that, for them, was just as overwhelming as a force of nature: the Earth Empire taking over their planet and creating huge mines to plunder their natural resources and subjugating them. So, the Doctor explains, the Black Dog was a new god created to symbolise how the Earth Empire took over their world and “drained it dry.”

The second related idea is Jung’s assertion that mythology is basically the psychology of an entire culture or community: the universal fears, worries, hopes and hangups that are common across the lives of many people, distilled into images and symbols the way dreams do so for the individual. That’s his idea of the collective unconscious. And the Black Dog is doing that, too. The Doctor fights it by substituting a different dream/symbol: Leela the Great Hunter.

And the third related idea is the idea of psychosomatic illness: what’s in the mind does impact the body, stress can wear down the immune system, meditation can strengthen it, and so on. Or, more controversially, there’s the idea (I got this from James Hillman, can’t remember if he originated it) that widespread diseases are symptomatic of a culture’s problems. In Victorian culture, sexism and sexual repression were rampant, and so people (not always but often) women suffered lots of “hysteria.” In the late 20th century, when success on the individual and national scale were so keyed to growth without any regard for limits of resources, cancer became far more rampant.

I’ve never entirely bought that line of argument, although it’s an interesting story. Again, the Black Dog represents the Earth Empire draining the planet dry, and it manifests in a wasting sickness that drains individuals dry.

So I think this story has a lot more layers than the reviewer who dismissed it as a shallow polemic against organised religion. The Black Dog isn’t organised religion— anything but, since it devoured the gods of the native religion (organised or otherwise), and their POV-character in the story longs to return to their old ways. It’s a disease, an infection that has eroded religion with despair. That’s pretty much the anthesis of what most religions do, provide people with psychological tools to help them cope with powerful forces that might otherwise demoralise them.