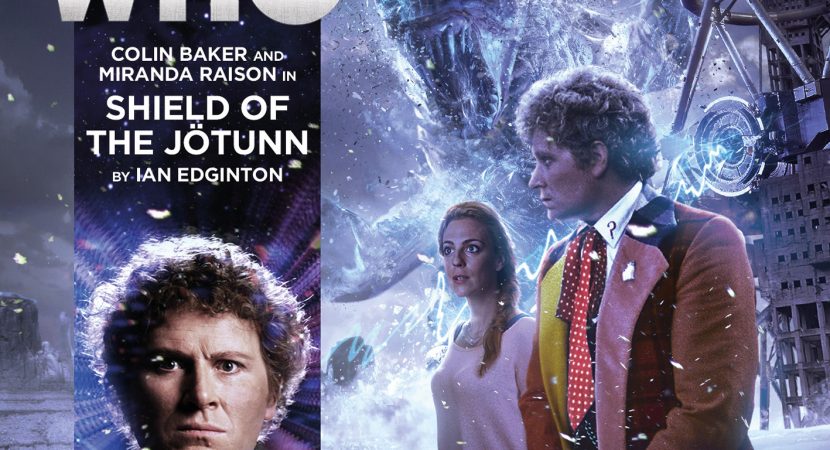 Well, that was a wild ride: A 21st-century climate change project disrupted by 11th-century Vikings and frost giants? Only on Doctor Who.

All we need is the Brigadier “just doing the best [he] can.” Alas, what we’ve got instead is bull-in-a-china-shop Americans. And, of course, Mrs Clarke, who is rather more useful in a pinch.

The clashing personalities and suspicions of the terraforming project’s team members keep the Doctor and Mrs Clarke on their toes until the weather turns nasty. But soon, a Who monster turns up, and then they’re fighting for their lives in a classic base-under-siege drama. The story is typical Doctor Who with a modern twist: after mucking with the climate too much, humans discover that the weather is fighting back.

This story just keeps snowballing, so to speak. I loved the way it throws a big pile of Who tropes into a metaphorical blender with the top off and flips the switch, coating every available surface. Disturbed burial mounds with unquiet dead? Check. Mysterious runes and artifacts? Check. Project members with something to hide? Check. Doctor and companion apprehended as saboteurs? Check. I won’t spoil any more. The point is, we’ve heard it all before (or most of it), but it’s engaging and fresh nonetheless. With a high body count and some gruesome imagery, but again, it’s pure classic Who.

That said, the climactic (and climatic?) showdown was a wild and original idea. I wish we could’ve seen it onscreen.

Thankfully, the idiot Americans turn out to be a little more than the sum of their stereotypes: the blunt but honourable major, the “I don’t understand it, I just throw money at it” billionaire, the put-upon foreman, and the nagging female scientist. Big Finish found real American actors, but alas the pool in England is somewhat limited, so brace yourself for thick southern accents that clash with Miranda Raison’s delightfully vintage RP like rhinestone-studded cowboy boots on John Steed.

Mrs. Clarke continues to impress with her level-headed approach to the most unlikely circumstances. The only quibble I have is one that’s common to most Big Finish audios: the Doctor and companion split up and pair off with guest characters for much of the story. It allows them to cover more ground and more plot than if they stayed together, but it shortchanges opportunities to show the Doctor and companion working together in a crisis. However, there’s good chemistry between them (no, don’t worry, not that kind of chemistry) during the first part of the audio. Between harrowing and not-so-harrowing escapes, they even manage to slip in some pedantry over the niceties of language. Sixie has found another logophile after his own heart.

*sounds of ravening monster closing in for the kill*
Prof Zetterling: We have to find a way out of here!
Mrs Clarke: Professor Zetterling, much as I hate to reprove an educated woman, your continued stating of the blindingly obvious is becoming not a little tiresome.

All right, so there’s one advantage to splitting up the Doctor and companion: the job of asking clueless questions and reporting what’s happening falls to the guest characters, while the companion gets to improvise their way out of danger and keep their sidekick alive.

Snappy dialogue and a creative concatenation of mythology, technology, and flawed humans makes this story work. There’s a even an iconic quote near the end, a line that fans would be putting on screencaps to epitomise the Doctor if they’d watched it on TV. Just don’t play a Big Finish TV Tropes drinking game with this one, or you’re liable to wind up in A&E.

Addendum: Oh! I just saw that Louise Jameson directed this one (for once, I didn’t listen to the extras before writing up my impressions). Now I’m looking forward to her directing other BFs. I doubt Colin needs much direction, but even so, she’s probably responsible for some of the energy in this story.

Hoo boy. This is one of those stories where online fandom is going to blame the Doctor for genocide, even though he was trying every way he could to avert genocide of the human race. And yep, in the end, genocidal humans thwarted his best intentions to rescue the 9000 angry frost giants trapped in the transmat buffer.

I loved the 20-foot-tall undead Vikings vs. frost giants battle at the end, which is what prompted me to say “only on Doctor Who.” Also, those flashbacks to the Viking era were an interesting change of pace and genre from technobabble, angry alien monsters and 21st century problems.

I can’t believe this audio managed to explain Vikings in Arizona— just about. (Cutting southwest from Nova Scotia and walking to Arizona is like a Canadian landing in Calais, walking east with no particular destination in mind, and winding up in Iran.)

Here’s that Doctor quote that caught my attention:

“A great reward awaits you, greater than any I’ll ever enjoy: to save a world, then to live in the world you’ve saved.”