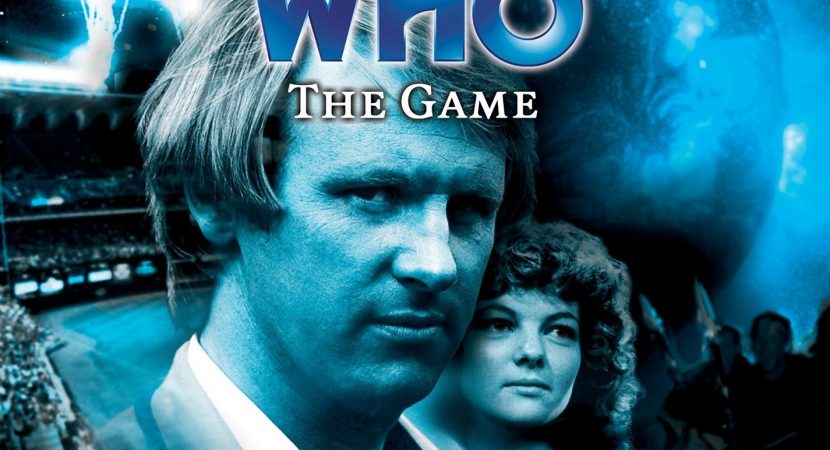 The Fifth Doctor’s a keen athlete, but this isn’t his game.

He takes Nyssa on holiday to Cray, where the game of Naxy is all the rage. Before they know it, the Doctor is mixed up in the planetary pastime, while Nyssa’s up to her aristocratic nose in politics. She attaches herself to Lord Darzil Carlisle, brilliantly played by William Russell (formerly companion Ian Chesterton), who has come to Cray as a diplomatic envoy. His mission may mean life or death to thousands of Naxy enthusiasts — including the Doctor.

I love 90% of this story and have listened to it many times, even though I’m not sold on the villain or the ending. The game scenes with their 80s music and sports announcers sound like a real sports broadcast, there’s action and danger, and the Doctor has some fine speechmaking and moments of great courage.

Nyssa: You sound like quite a fan of this Darzil person.
Doctor: Fan is one way to put it, although I prefer the term ‘enthusiast.’

By this time, the easy rapport between the Fifth Doctor and Nyssa has solidified into a professional working relationship as well as friendship. They’ll tease and even mock one another, but they truly care about and understand one another. Yet Nyssa’s not simply the Doctor’s assistant, if she ever was; she makes her own choices, sometimes (as we heard in Spare Parts) at odds with his wishes. Nyssa’s relationship with Lord Carlisle is a case in point. In a way, dealing with the Doctor has taught her how to deal with him. The Doctor, meanwhile, has a unique relationship with Carlisle that results in some touching and memorable scenes.

At this time, Big Finish hadn’t yet lured Tom Baker back or figured out how to tell new adventures set during the first three Doctors’ eras without the original actors. So instead, BF brought back some early companion actors to play guest parts: Anneke Wills as Lady Louisa Pollard, Deborah Watling as Auntie in Three’s a Crowd, and William Russell as Lord Carlisle. I’m glad we have Early Adventures, Lost Stories, and Companion Chronicles letting them play themselves, but I really love hearing what familiar actors can do with new roles. This is a great example. William Russell gives so much to the part that he makes this audio a lot more rewarding than it might be otherwise.

If you follow any real-world sport, The Game offers an extra level of entertainment in its intelligent satire of pro sport. There’s athletes and coaches who sound like real-world personalities, and there’s some commentary on parity and the seamy side of fan culture. Some listeners who don’t care for this side of things may find the audio less fun than I did.

The only letdown is the clichéd villain, who’s not really that bad, but the way the story ties off his arc is less than satisfying. Also, Faye’s actress was noticeably stilted compared to the rest, either because Big Finish has very slim pickings when it comes to finding American voices, or because an American accent in a British production hits my ear as harshly as a thick cockney or Liverpudlian or Geordie accent strikes some snooty southerners.

I’m guessing from the 6-part, 20-minute format that Big Finish was experimenting during this period, hoping to woo fans of the new show whose pilot episode broadcast the following month. Despite my quibbles, I think this experiment was a great intro to the audio range.

Speaking of experiments, I’m glad Big Finish dropped the idea of Morian as a recurring villain. It’s not easy to invent a new Master-like nemesis, or even a Meddling Monk. He was fine for one adventure, but I’m sure if they had this audio to do over, they would’ve had him receive his just desserts instead of escaping.

This is one of the early stories to explore the Doctor’s relationship with his companions and his impact on their later lives, which would come back in force in School Reunion. I love the idea of the Doctor’s first meeting with someone being their final meeting with him. The new show has recycled both these ideas.

This is another story where Nyssa decides to stay where she can make a greater difference, arguing that the Doctor doesn’t really need her. She did it in Spare Parts. It’s why she left in Terminus. And the older!Nyssa arc picks up on that theme again, first definitively established when the Doctor tried to leave her in Traken’s idyllic past, but she insisted on travelling with him until she could find a meaningful role to play somewhere. All her time spent with the Doctor is training for that goal. More than most companions, she is very matter-of-fact about the fact that her place is at the Doctor’s side, “for now.”

At the end of The Game, Nyssa asks the Doctor to postpone his adventures with Lord Carlisle until after she is gone. Considering how Big Finish has extended her life past Terminus and given her an even more heroic but traumatic departure, I can’t help wondering if the Doctor fulfilled her wish immediately after Entropy Plague. It would have been an appropriate if painful bit of closure.