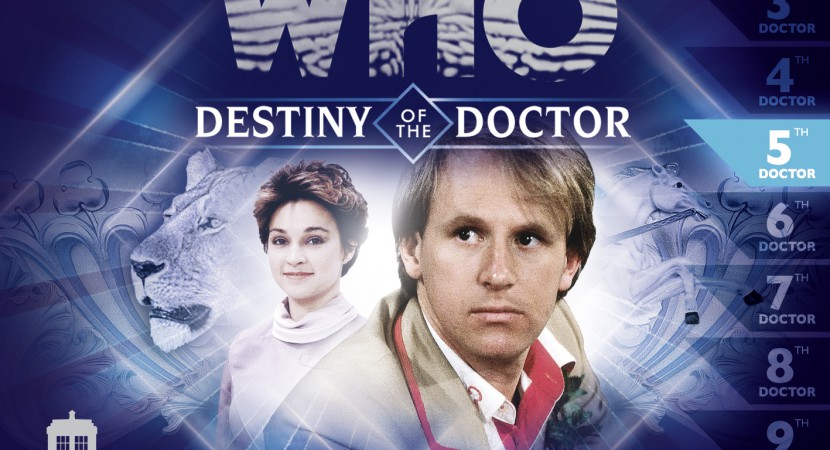 Ha, Janet finally got roped into a Companion Chronicle style story. It’s a fun, simple story with a lot of authentic Season 19 grace notes to tickle fan nostalgia (which I desperately needed after 8 Dalek Empire audios in a row).

The Destiny of the Doctor series of was released jointly with AudioGo for the 50th anniversary, one for each Doctor. As much as I love Sarah Sutton, it’s high time someone else was given a crack at Five’s era, and I’m so glad Janet agreed to do it. Mind you, this means it’s more of an audiobook than a full drama, with two people reading a third person narrative aloud accompanied by sound effects. However, given that limitation, I quite enjoyed it.

This story is set before Black Orchid, when Tegan was still trying to get back to Heathrow. (Trivia note: Tegan nagged Five to take her home in only two TV episodes before she decided to stay on). Since he just can’t bear to let her go (!), the Doctor instead nips back in time to visit an old friend, Harry Houdini. Harry needs the Doctor’s help to investigate a mystery that may not be from Earth or his time period. Sensing danger, the Doctor shoos his young companions away, which backfires when they all land in horrible trouble separately. There’s betrayal, possession, and a spooky ramble through the grounds of an old-fashioned circus after dark, but this is a fairly lighthearted adventure.

Steve Lyons captures the banter and personalities of the Overcrowded TARDIS very well, although he runs into the usual problem of finding enough for all of them to do. The end is a bit hand-wavy, but that’s fine. There’s action, tension, a classic villain, 80s incidental music, and some good personal moments. Nor is it all pat and easy. The Doctor is let down in this story. He’s quiet and polite about it, but you can tell he’s been stung. However, unlike some incarnations, this one tends to shrug off pain or at least mask it behind nonchalance.

I love the final scene. It’s bittersweet to see the Fifth Doctor back as he was soon after Castrovalva, before grievous failures and companion losses took their toll on his innocent, buoyant spirit.

I think this may be Janet’s first time acting solo. After a brief warm-up, she’s performing the whole crowded TARDIS like a pro. She and Sarah are too kind; they portray their co-stars faithfully while Peter and Mark tend to slip into parody. Author Steve Lyons wisely remembered that Janet has a knack for villain voices. She doesn’t do the Mara-laugh, but she can roll out an evil cackle. She also whipped out a spot-on impersonation of a very familiar character from New Who.

I wasn’t quite as taken with Tim Beckmann as Harry Houdini, who struck me as somewhat wooden. That may be my Anglophile ear showing: I always wince when I hear people who sound like me on Doctor Who. Even when the only other speaker is a whole hemisphere away from Received Pronunciation, the contrast hits my ear like a duet played in pentatonic and octave scales.

The big news about this story is that it does something that Big Finish can’t usually address, due to the fact that the actor (a) wanted to charge them a mint to hire him and (b) has expired. Namely: Anthony Ainley’s transformation from Tremas (the most unluckily-named character in the Whoniverse) to the Master. On TV, Nyssa and Tegan never had much of a chance to confront him, apart from Tegan’s “you revolting man!” and Nyssa ragging on him for coming up short against her ion bonder carpentry skills in Castrovalva. (At which point he flung her across the room and into Tegan’s arms, which satisfied certain shippers, but did not satisfy my personal thirst for revenge on Nyssa’s behalf).

At any rate, I’m grateful when Big Finish gives Nyssa and Tegan a chance to face their nemesis, the uncured ham. Janet’s Anthony Ainley imitation was hilarious. The mirror trick was a bit daft, and Tegan and Nyssa still didn’t have much of a chance to tell him off, but at least they had a showdown with him.

(Ainley!Master is one of my favourite TV incarnations, ham and all, but I confess I’m relieved that Beevers is Big Finish’s go-to Master for the classic-era Doctors. He has a certain gravitas that Delgado possessed and Ainley lacked. But he frustrates my wish for some of my favourite companions to turn the tables on their tormentor. Therefore, this audio hits my sweet spot.)

On another topic entirely, if this had been a TV story, Mary Whitehouse would have been apoplectic at Harry Houdini nearly drowning the Doctor in a box. Good cliffhanger stuff, a very plausible Gandalf Hot Tub. (Ever notice how Tolkien keeps having to stash Gandalf elsewhere so the party can get into real trouble?)