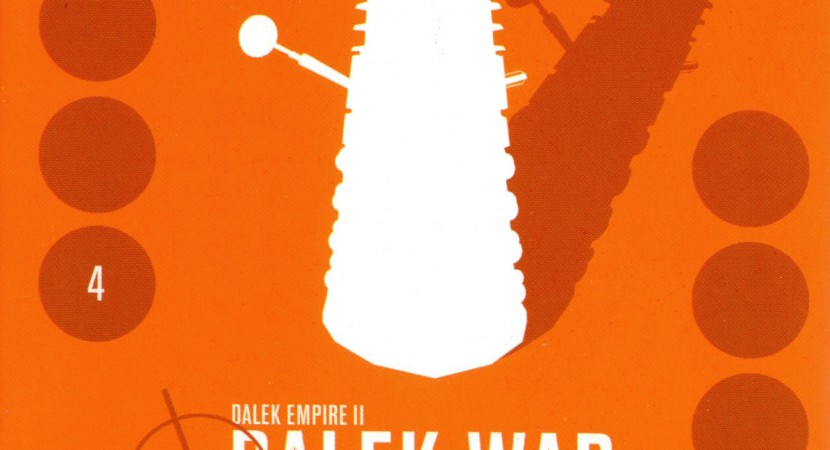 Dalek Empire Series 2 is actually an extended flashback, just as series 1 was. This time, the context is a conversation 2000 years in the future, when some future crisis has driven two people to seek answers in the past. Just what did Kalendorf do, that the galaxy is still recovering two thousand years later? What happened to him, to Susan, to Alby and Mirana, last heard from floating through space in chapter 3?

“You’re saying that Kalendorf is the Dark One? The mythical figure who brought about the Great Catastrophe?”

Confession time: I had some difficulties listening to this audio. It started with such a difficult twist that I spent half the story brooding over it and wasn’t fully able to engage in the 2000-year-in-the-future framing story or Kalendorf’s campaign. Not to say it wasn’t well-done. Once again, we have a sense of battles and war on an epic scale, yet the power of the story comes from personal moments, and from courageous, brutally pragmatic choices. There’s one particularly excellent scene when Kalendorf starts to lose it that finally shows us the person behind the steel will. Unfortuantely, Kalendorf winds up among characters we haven’t met before, and even with Big Finish Helen Goldwyn standby stepping in to carry the torch, I find myself missing the others.

The framing story in the far future gives an odd sense of futility, poignancy, and eternity. On the one hand, the actions of the characters we’ve come to care for have changed the fate of the galaxy. On the other hand, they’re long-dead and mostly forgotten. That doesn’t take away from what they did, but it does put their lives in perspective, like planets against the backdrop of the universe.

Victory or death. It’s the oath taken by the Knights of Velyshaa, and Kalendorf lives it. He’d much rather have gone out in a blaze of glory.

Again, I find myself wondering where the Doctor and the Time Lords are in all this. Isn’t Gallifrey supposed to be in our galaxy? It was never entirely clear.

I’ve only just finished listening. My first impression is that Gareth Thomas is as magnificent as ever, and Sarah Mowat is a worthy co-star who carries the dramatic weight of Dalek Empire on her shoulders. However, I feel like the Daleks after Barbara and Vicki ran them down. What just hit me?

The ending lays the groundwork for future Dalek Empire seasons. Of course, the Daleks haven’t been wiped out for good. I certainly mean to listen to the rest, as they’re great drama, but I need to recharge first. I’ll be returning to my Big Finish Listen-o-Thon, listening to and reviewing my library of Main Ranges and spin-offs in release order. Looks like I’m up to May 2003.

Looks like I’m back to Five and Nyssa, my favourite TARDIS team, and Creatures of Beauty. Ah, yes, just the thing to cheer me up.

Both wars are won through one-on-one conversations between Kalendorf and his counterparts, the Dalek supreme commanders. Handy for audio. It’s a tribute to Gareth Thomas (and Sarah Mowat as Susan and Hannah Smith as Mentor) that we can believe those confrontations really did decide the fate of the galaxy. Mind you, I found it a tiny bit  anticlimactic when Mentor says, in essence, “We’re going to pack our goodies, and we’re going home.” But the alternate-Daleks aren’t quite as important as the Daleks that the Doctor and the Earth Alliance have been fighting all along. That leaves more time for the more important showdown: Kalendorf and the Dalek Supreme and Susan. Which was fantastic. Sarah Mowat makes a great emperor, and I love that moment when Susan’s voice finally breaks through.

I can’t escape the feeling that there were three Dalek factions in this story. The choices of Susan and Kalendorf led to so much death and destruction, and Kalendorf was exactly as fanatical as Mirana feared he would be. She died, and Alby died, and Susan became a monster, in support of his cause. Kalendorf could talk about free will, but with casualties like Alby dying in Susan’s arms, is that any better?

The Angel of Mercy. The Dark One. In the end, they’re both saviours and destroyers.

Was it worth it?

On the macro scale, Kalendorf has driven out the Daleks (for now) but caused so much damage that not only Earth but apparently the entire galaxy has lost most of its technology; they’re back to solar sails. On the micro scale, I’m not sure I can get over Susan killing the man she loved, the man who loved her enough to lose his legs and seek her all those years and years. Was it worth it, even to save the galaxy? (And did it?)

And for that matter, poor Mirana, and Herrick, and yes, Marber (whom I misjudged), and all the victims caught up in this conflict.

I’m reminded of the Doctor and Steven at the end of Master Plan: “What a waste.”

Or the Fifth Doctor’s, “There should have been another way.”