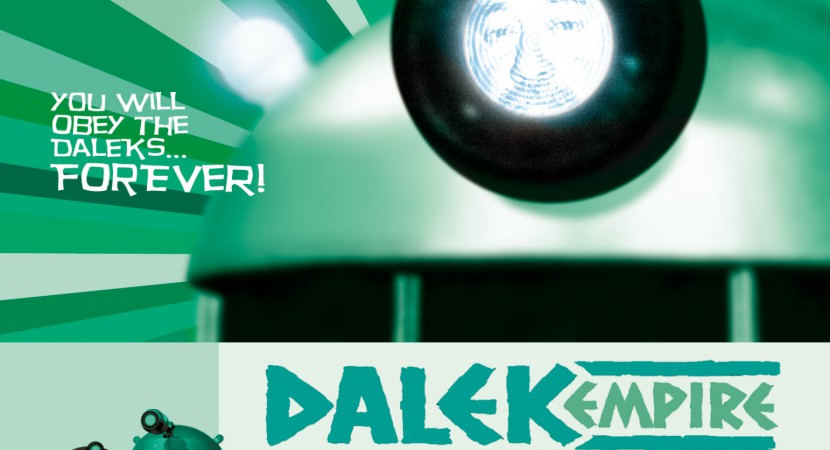 Having burnt out on classic Who Daleks in the 80s, I’d never thought I’d say this, but: I’m hooked.

Don’t get me wrong: Daleks on TV could be menacing. However, by the late 70s, many serials depicted them bumbling around like shouty oversized toys. My hazy memories of the Daleks consist of the Doctor and companions tricking them into traps, successfully hiding or escaping from them, or thwarting their plans for galactic domination. That tended to undermine their reputation.

Whereas Nicholas Briggs has found a way to dramatise the evil, indomitable, tactically brilliant military force they were intended to be. In this series, “Emperor” is more than an empty title, and we don’t have to take it for granted that the Daleks have conquered large swaths of the galaxy: we’ve witnessed it. The half-dozen worlds visited during series 1 are enough to give us a sense of countless other planetary populations in various stages of subjugation or siege. For extra emotional punch, we hear updates on Earth’s crumbling defences. Yet all these epic events never eclipse the personal, human factor in the saga. The evil empire is not the drama, any more than it is in Star Wars, but merely setting and context. Instead, the spotlight follows the choices and struggles of Susan Mendes, Kalendorf, Alby Brook and the allies they find along the way.

“You are the Emperor? You’ve never spoken to me before. Why are you speaking to me now?”

By this time, Susan and Kalendorf have been the Daleks’ reluctant lackeys for years. The bitter irony is that all Susan’s efforts to save lives contribute to the Dalek war effort. Can she and Kalendorf pull off some grand gesture to redeem themselves, or is it too late? To make matters worse, Susan is beginning to sound more and more like a Dalek herself.

Meanwhile, Alby Brook, disreputable Earth Alliance Security Agent, continues to hurtle from one life-threatening situation to the next in his dogged quest to find Susan. His commanding officer Tanlee can’t stand him, but needs him for a mission that may break Alby’s heart. First, however, there’s one new nuisance to fend off, now that Alby’s last traveling companion has exited stage left. Enter Police Officer Mirana as the latest gadfly.

The main characters are few but engaging, allowing us to see the war and empire from both inside and without. I particularly love Susan’s rude awakening in this story. She can’t keep on playing the “angel of mercy” while simultaneously abetting the Daleks’ villainy… or can she? Has she started to become preoccupied with power? Kalendorf once again serves as her gruff, blunt voice of conscience. Near the end of the story, they have an absolutely riveting heart-to-heart, in which Gareth Thomas pulls out all the charisma, passion, and gruff heart-of-a-lion he can convey behind the sarcasm. Compared to those two, Alby’s far more straightforward, but he’s finally building some emotional depth, much of it revealed when he’s drinking away his sorrows. He, too, can’t go on like this forever. And what exactly is this Project Infinity that we keep hearing about?

There’s exciting twists and turns, psychological and emotional tension, and a devastating climax. The odd thing about “Death to the Daleks” that it skips right over an epic dramatic moment that TV would insist on staging as the climax of the story. Instead, “Death to the Daleks!” jumps straight to the aftermath (mild spoiler: we’ll be revisit. It reminds me of artwork that engages the viewer by leaving out lines that the mind fills in unconsciously. That makes for an effective cliffhanger. Quick, queue up the next audio!

Note: DON’T listen to the trailer for 1.3 on the Big Finish website. It contains major spoilers.

I avoided saying much about Pellan because, unfortunately, I read a spoiler about his status a while ago. So I knew he wouldn’t last. I now understand better why the four earlier Main Range audios were labeled “Dalek Empire”: they were all establishing precedents for things that happen in this saga. You don’t have to have heard those audios, but you won’t be caught flat-footed wondering, “Hey, since when have the Daleks done things like that?” Mutant Phase is an alternate timeline, but it establishes that the Dalek Emperor can project a mental link with a specially-implanted victim. Also, I’m reminded of Time of the Daleks, when the Daleks showed a surprising grasp of human psychology and used it to manipulate and take advantage of them.

I also appreciate some “as you know, Bob” exposition helping me untangle Dalek colour coding and hierarchy. It’s been a long time since I saw classic Who, and I’ve only seen a few Dalek stories in new Who, so I, too, was wondering who the shiny red Daleks were.

As for the cliffhanger: holy hells. Susan did it. Unsung hero it is.

And despite Kalendorf’s pleading, he really is a better-qualified candidate to lead the fight to the Daleks. An ordinary person can rise to the occasion, but he’s a trained warrior.

This trilogy did a magnificent job of keeping us guessing about whether Susan was ultimately a hero or a villain (and perhaps the jury’s still deliberating on that). I wasn’t sold on the love story angle for a while, because there was so little of a basis for it, but  I’ve come to see it as a palatable modern rewrite of the Romeo & Juliet template. Love at first sight, separated before they’ve really had much time to be together, and they don’t waste time pining or moping about each other very often— it’s just there, as an unspoken subtext, the way love often is. Susan had to sacrifice it to get on with the greater good. Alby? May have grounds to blame Mirana for delaying him or Kalendorf for surviving (how?) when Susan died. At any rate, I feel for him.

About Jeremy “Jez” Fielder and/or James:

Why do I keep tagging every Jeremy James appearance, despite the fact that he’s only a regular in the Sarah Jane Smith series? It’s totally arbitrary. To be consistent, I should be tagging Barnaby Edwards and Mark Gatiss and Nick Briggs and all the other recurring Big Finish guest voices, some of whom play even more roles than he does. But he voiced some of my favourite guest characters, and he keeps switching pseudonyms, so it’s come to be a “Where’s Waldo?” game for me.