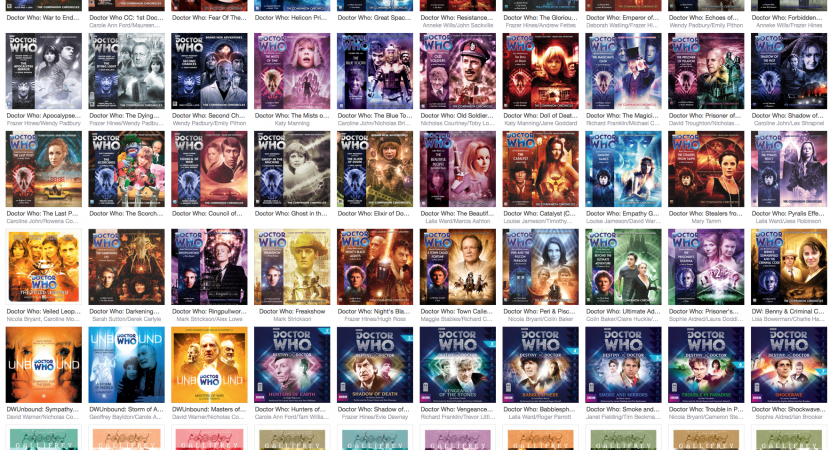 Want to get into Big Finish, but strapped for cash? Want to test the waters? Not only has Big Finish discounted the first 100 Main Range audios to £/$3 apiece, but they’ve also uploaded hundreds of audios to Spotify, free to listen to if you register a username/password on Spotify. Here’s a linked index to all Big Finish Doctor Who on Spotify, with quickie comments to help you choose good ones to listen to (originally posted on my Tumblr):

Big Finish Doctor Who on Spotify as of May 2017

Main Range are 4×25 minute episodes with cliffhangers; the rest are usually an hour, apart from Short Trips which are 8×15-minute short stories.

These are full cast audio plays which try as closely as possible to capture the style/feel of classic who TV serials, with better writing and character development. Most Main Range are standalone. Those with arcs I’ve starred (Eight & Charley audios all follow a loose character development arc; * are the ones with essential beats for Charley’s Bigass Plot. “Project: [X]” ** audios are a multi-Doctor arc.) Bold are audios I rated 8/10 or above.

One-hour adventures. The Eighth Doctor moved from the Main Range to his own series after Charley left. Fans adore Lucie, but I’ve only heard her recent Short Trips — she’s great. [Complete Playlist]

The Seventh Doctor, Elizabeth Klein, Raine (a companion that would’ve come aboard after Ace had classic Who not been cancelled), and **SPOILER** played by the brilliant Alex MacQueen. This is a series of four one-hour stories. Haven’t heard it, but I’ve heard good things about it.

[Links to Volume One and Two on Spotify]

Unlike most Big Finish ranges, Short Trips are not full-cast radio plays. They’re mini audiobooks, nowadays half an hour, but these anthologies were eight 15-minute short stories read by a single narrator, usually a companion or (for Five and Six) the Doctor himself. I love listening to these while doing chores. Vol I has several of my favorites including Colin Baker’s very own delightful fanfic “Wings of a Butterfly.”

I’m sure RTD had these Daleks in mind when he envisioned the Time War. I can’t recommend it enough.

If you’ve exhausted all of Big Finish on Spotify, go on, give these folks a copper and buy a few from their website. Gotta support them so they can keep making ’em! But again note the first 100 Main Range are cheeeap.