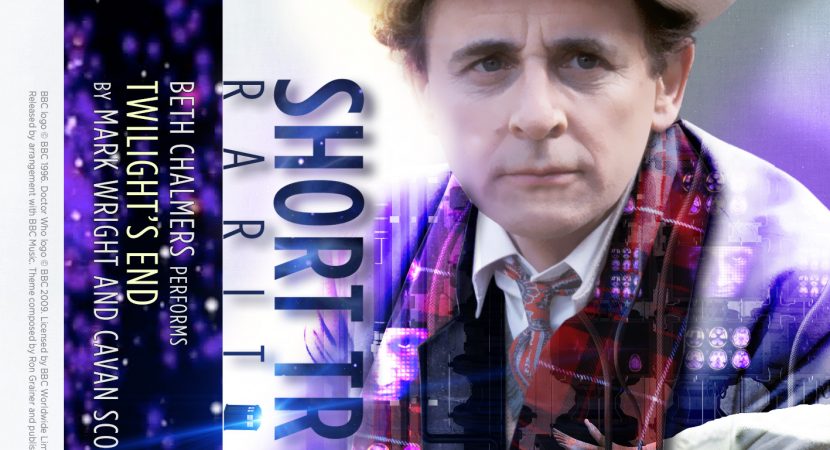 This is an intense 40 minutes that serves as an epilogue to the Project: Forge story arc. It includes enough context to make sense if you haven’t heard those Main Range adventures— I’ve heard only the first few— but it spoils multiple character deaths. The emotional impact is a little greater if you remember those characters.

This was originally a Subscriber Short Trips audio, released in June 2011 as a bonus audio with Main Range subscriptions, now available for purchase in the “Rareties” range.

Beth Chalmers is the narrator, although Raine Creevy doesn’t appear in this story. Instead, it’s the Seventh Doctor in a corridor crawl (or dash) trying to stay one step ahead of armed guards, outwitting security systems, and confront a past nemesis. Beth takes on blocks of description with smooth ease, and she mimics Sylvester’s voice when needed. The style is reminiscent of Virgin New Adventures.

The opening action sequence packs more excitement than many episodes of classic Who. The second half is a psychological and verbal sparring match between old foes. It’s tense, visceral, and melodramatic, with lots of meaningful looks and body language beats and even a reference to “brilliant blue orbs” for eyes. Third person narration allows this story to delve a little more deeply into the Doctor’s feelings and thoughts about their painful, tangled history than he normally lets on.

The conclusion is open-ended, leaving the listener to speculate about what happens next and mull over ethical questions raised by both Nimrod’s actions and the Doctor’s.

If you’ve followed The Forge storyline, it’s definitely worth hearing. It’s vivid enough that it works even if you haven’t, although I’d recommend avoiding it due to spoilers.

This is one of those times when Big Finish flexes its greatest strength or hubris, depending on one’s POV. Like Moffat, it’s not afraid to retroactively impose unifying themes, explanations, or events on classic Who canon.

In this case, the Seventh Doctor suggests that guilt over Cassie’s death in Project: Lazarus (and Evelyn’s heartbreak over that loss) is the reason he regenerated into his current incarnation as a chessmaster. Having failed Cassie, he no longer dares to leave matters “to chance,” and has embarked on a quest to tidy up the unfinished business of his past selves.

Note: This is Short Trips Rareties #9 on the Big Finish website, but when downloaded it’s #2.03, part of a boxset.