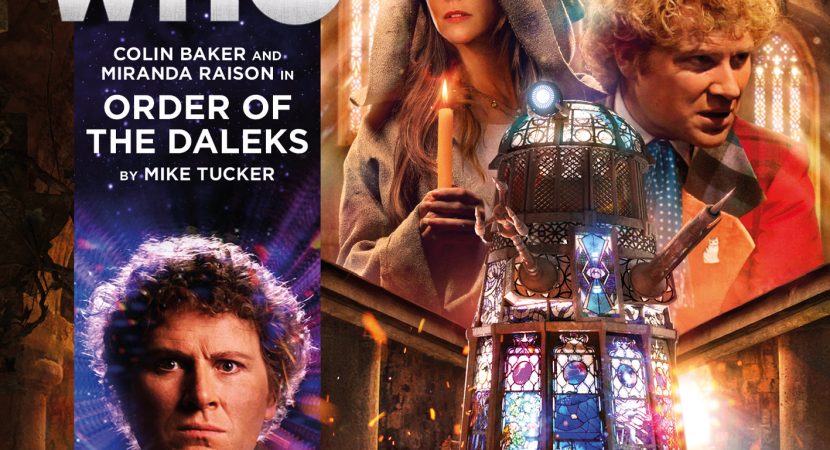 Sometimes, you can judge a book by its cover.

This is a strong, lively Big Finish adventure with enough Dalek business to satisfy die-hard Dalek fans and enough original material to satisfy those who see X of the Daleks and think, “Here we go again.” There’s enough scrapes and rescues to please everybody (even me; I want the companions to save the Doctor’s skin sometimes as well as for him to save theirs).

The scriptwriter knows his Daleks. Mike Tucker, assistant visual effects designer towards the end of classic Who and co-designer of the first Dalek in new Who, also wrote Big Finish’s first Dalek story, The Genocide Machine. I’m surprised they didn’t drag him back sooner. He also penned another more recent Sylvester McCoy audio, The Warehouse.

Part of the fun of this story is a touch of One Doctor rivalry, except that this time, it’s played more seriously. The Doctor locks horns with Intergalactic Census Assessor Pendle, who’s incensed at the Doctor’s cavalier attitude towards waving technology about on a primitive planet.

“Allow me to reassure you. I am something of an expert when it comes to visiting pre-space-age civilisations. I… am a Time Lord.”
“A Time Lord?”
“Indeed.”
“Then you should know better!”

Each of them is confident they’re the man qualified to handle a delicate mission, and that the other fellow is an arrogant fool.

Their more pragmatic assistants, Jane Asta and Mrs Clarke, cut through the battle of egos and focus on the immediate problem: locating the source of a signal that is almost certainly alien. It seems that somebody else is violating this galaxy’s version of the Prime Directive.

Most of the story takes place in a monastery that has rather deeper problems than The Name of the Rose. Investigating its secrets will require all the Doctor’s diplomacy (and more than Pendle’s). Unless he can enlist an ally among the suspicious, superstitious brotherhood, the monks are liable to execute the Doctor and friends as demons.

It takes him some time to learn who the real demons are.

On her first off-Earth adventure, Mrs Clarke met the Rani. Now she comes face to face with a Dalek! Talk about a Who companion crash course. Once again, her WWII training combined with her innate pragmatism serve her in good stead. She and Asta team up, relying on each other’s common sense to infiltrate and sabotage while the Doctor and Pendle negotiate, investigate, bicker, and confront the larger problems caused by the Dalek presence.

Despite his aggravation with Pendle, the Sixth Doctor is in fine form (but when is Colin not?) in this audio. This script catches that subtle blend of surface abrasiveness and deep compassion which is the Sixth Doctor’s hallmark. He has one excellent moment where he pits the force of his rhetoric and convictions against a foe. And of course, for all Mrs Clarke’s competence, there’s really only one person on this planet capable of confronting the Daleks directly. Or is there?

There’s something slightly odd about that abbot.

In general, the NPCs— er, guest characters— are a likable and/or interesting lot. I’m curious about the decision to have one be silent for almost the entire audio. It’s a little awkward having a character we can’t see or hear, but there’s a emotional payoff for him and his twin towards the end. All of the secondary characters, in fact, undergo mini-arcs. That doesn’t leave much time for worldbuilding, but there’s enough to establish flora and fauna, as well as the daily life and politics of the monastery.

About that cover. I can’t say very much without spoilers, but yes, the author took the premise of “Daleks in a medieval monastic setting” and ran with it.

Chris Thompson’s CGI stained glass Dalek, aka “Dalek Stainly,” may be the most famous thing Big Finish has ever produced. I’ve seen it shared on social media sites (sadly, unattributed) by people who aren’t even Doctor Who fans. There’s a gorgeous large-sized render of it on Order of the Daleks director Jamie Anderson’s website, in addition to Chris Thompson’s dramatically-lit render linked to above. He’s got some behind-the-scenes comments for the curious. Finally, fan Debra Redfern made a fantastic “Dalek Stainley” cosplay for Gallifrey One.

The crashed Daleks in this story remind me a little of the High Priest in The Elite. But the conceit of Daleks integrating themselves into a priestly hierarchy works rather better here, since they’re co-opting rather than founding a religious order. Also, the Abbot is a more nuanced and charismatic liaison between Daleks and minions than the one-dimensional, cackling nutcase in The Elite.