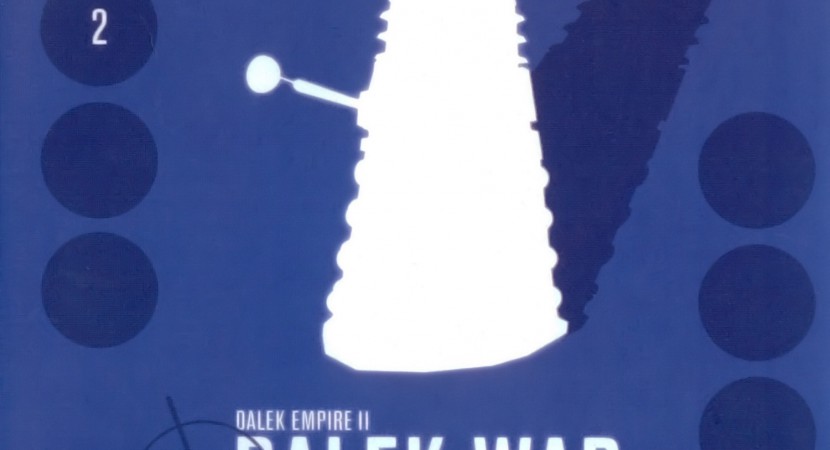 What’s worse than one Dalek Empire? Two! Or at least, that’s the contention of Dalek War. Allying with one Dalek faction against the other feels about as safe as allying with Joseph Stalin.

I’m enjoying series 2, but I’m missing the sense of overwhelming danger and oppression that Dalek Empire I conveyed so menacingly. While enslaved, Susan and Kalendorf were never out of the Daleks’ clutches for a moment, always one “exterminate!” away from game over. Poor Alby kept rocketing from one crisis to the next, losing ships and allies and even limbs every step of the way. Whereas Dalek War has lulls between critical moments. It feels more like a book than a realtime drama, pausing for exposition and flashback instead of weaving information into the action.

That said, it’s got a heck of a cliffhanger, for all that I could see it coming a mile away.

We’ve got three and a half plots in this story. Alby, Mirana and friends have been taken captive by enemy Daleks, while Kalendorf is proving himself an able fleet commander, driving the “bad” Daleks all the way back to Earth’s solar system. If waging a war against Daleks wasn’t enough of a job, Kalendorf also has his hands full placating an overbearing CEO. Behind her back, he’s sent Mirana on a covert mission.

Mirana: I don’t know what Kalendorf has in mind. He said it would be safer that way. But I trust him. Don’t you?
Alby: He’s a warrior of noble birth. I’ve always thought that made him pretty bleedin’ dangerous.

The Daleks’ captives spend the first half of the episode trading backstory and flashbacks. The longest of these is Alby’s adventures, explaining what he was up to in Chapter 1 and how he came to pick up yet another aggravating stray, Morli, plus Dalek hitchhikers. This flashback sequence is so protracted that it has to be telegraphing clues. There’s some anvil-sized hints that I’ll talk about in the spoiler section below.

But first, one minor spoiler, because there’s a character I can’t name without giving away the fact that the character is in this story. Shoo if you don’t want to know, and be sure not to read the cast list on the Big Finish write-up for this episode.

Most of us came to Big Finish through Doctor Who actors we saw on TV, so we already had an affinity for the regular cast before they spoke a word on audio. Whereas most of the spinoffs have to win our attention from scratch. Dalek Empire has the good services of Gareth Thomas, and Kalendorf is a great character, but he can’t carry the series on his back (or his lovely voice). Nor did he, in Dalek Empire.

That honour goes to Sarah Mowat. I confess it took a while to warm to her, since she was playing a very ordinary character at the outset. Since then, Sarah has made Susan both sympathetic and (at times) problematic, driven to the edge of despair and to the precipice of arrogance, motivated by a potent mix of compassion and simmering rage. Susan might have fallen into the hackneyed damsel in distress role, because she’s so often a Dalek pawn, but she never does, largely due to the actor’s ability to give her dignity, pragmatism, and guts in the face of Dalek threats. She berates herself for giving in to their orders to stay alive, yet so often she faces them down and orders them around.

In a similar vein, Alby Brook didn’t interest me much at first, but I’m coming to appreciate Mark McDonnell’s portrayal of this everyman who says he’s no hero. His desperate fury, trying to protect the woman he spent so many years looking for, is far more moving than any soppy declaration of love. In fact, this is an interesting love story, because their tongue-tied reunion is overshadowed by their plight.

The other main actors of this small, tight cast carry their parts well, too, (not least the Daleks, including Nick’s charismatic Daleks and the unsettling Mentor). Originally, I was hooked on Dalek Empire for plot and worldbuilding, but I’m now a fan of the characters as well.

One other item: there’s a “Moon is an egg” bit of pseudoscience that’s so rare for Big Finish that it brought me up short. I have some faith that Nicholas Briggs knows better, so here’s hoping this is some kind of illusion.

I haven’t been talking enough about Kalendorf. He’s fallen into the same bind Susan did as the Angel of Mercy, serving as humanoid-Dalek go-between, forced to play along with Mentor while secretly plotting against her. Ironically, his position is even more precarious than Susan’s was, since the “bad” Daleks tolerated resentment, defiance, and disloyalty from Susan, provided she did her job, whereas Mentor requires meek obedience. It will be ironic if the “good” Daleks exterminate Kalendorf after the “bad” Daleks allowed Susan and Kalendorf to live despite their plotting.

Here’s the pseudoscience that threw me: terraforming Jupiter, of all things, a giant ball of gas and liquid hydrogen! Even if you ignore the lethal radiation belts around Jupiter and the feeble, distant sunlight that would make conventional plantlife impossible, you can’t ignore Jupiter’s gravity. It would squash vegetation and people flat. If you tried to land there, you’d never take off again.

Or, if you somehow eliminated most of Jupiter’s mass to make an Earth-gravity planet, its 60+ moons would go flying in all directions like a whirling bag of marbles with a hole in it. The loss of the second-most-massive body in the solar system might even reshuffle the planets. Why not simply cram the four largest Jovian moons together and make a rocky planet out of that? Or, better still, terraform Titan, which is nearly the size of Mars.

I keep hoping the terraformed Jupiter will turn out to be a hologram like the Dalek Emperor’s casing.

Which brings me to the chief Chekov’s gun of this story: Morli. Alby really, really needs to stop picking up strays who turn out to be Dalek agents. (Is Nicholas Briggs really going to pull this ploy again?) But the hints come thick and fast. Her incessant hunger, her extra muscle, her lack of any memories before she arrived at the station, her Mentor propaganda, her attempts to detain Alby, her use of “we”— they all suggests she’s harboring something inside, and that she’s a guinea pig for the “good” Daleks.

And speaking of paranoia, I don’t entirely trust Mirana’s second-in-command Marber either. Again, it would be overusing a plot device, but what if he’s working for the “bad” Daleks while Morli’s an agent for the “good” ones?

In the early 2000s, Nicholas Briggs discovered a simple yet sinister truth: Daleks are ten times scarier when they call you by your full name. I first noticed the effect in Jubilee, which came out in the same month as Dalek War – Chapter 1.

Evelyn Smythe. Susan Mendes. It’s the old, old myth about names granting you power over demons, except in this case, it’s the demons who know who you are. It’s all the worse because Daleks do not value individuals, save for their usefulness.