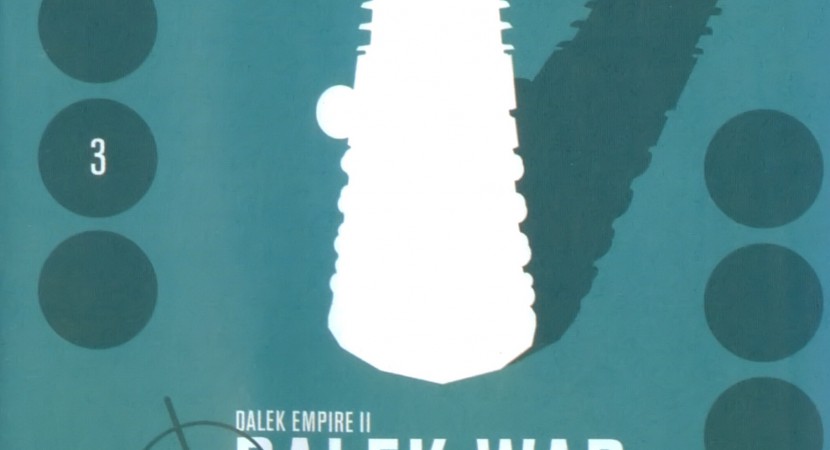 I was just starting to think, “Oh, Nick, I really do love this series, but it’s dragging a bit,” when Kalendorf hit the afterburners.

The hardest part about reviewing Dalek Empire audios is remembering where each one started. I’d review them by season, but I am a doddering Whovian from a past century with a memory like a steel sieve.

Let’s see. It started with a classic Who cliffhanger copout, deflating the crisis at the end of the last episode with a quick handwave. Well, no, actually, it strung us along for a scene or two first before the “just kidding!” retcon. In fact, the opening was a suitably unsettling reminder that the Alliance Daleks are led by a kinder, gentler version of Dolores Umbridge. Hannah Smith does an excellent job of making Mentor unsettling.

Alby and Suz finally have a brief romantic interlude, somewhat spoilt by diabolical Dalek plots and the presence of Alby’s latest annoying hitchhiker. Sarah Mowat and Mark McDonnell pull off the sweet stuff with understated performances that work better than phony gushing. They sound tired. After so many years trying to find one another, they don’t seem to know quite what to say.

“Well, we haven’t had much luck, have we? There’s always been something in the way.”
“Several light-years of space, you mean?”

Meanwhile, Mirana and her first officer have a lengthy, life-or-death sequence in an escape pod. Their situation is dire, but Marber’s single-minded questions are doing nothing to allay my suspicions.

Kalendorf gets the lion’s share of action in this story. The others are mostly in a holding pattern with a dash of mortal danger to keep them occupied. Predictably, his expedition to Terraformed Jupiter (!) does not go as well as hoped. Quite early in this audio, I let out a heartfelt, “Oh, no,” since I happen to have just watched a recon of Mission to the Unknown. I don’t know whether it’s better or worse to know exactly what’s about to happen to Kalendorf’s troops. I listened with resigned, helpless horror as the mess unfolded. As the situation deteriorates, Mentor crossly pulls Kal aside and scold him for his lack of Who trivia.

I love the verbal sparring between Kalendorf and Mentor. Who will get the upper hand? The crisis starts to spiral out of control even as Kal’s secret plans begin to unfurl. He’s almost as devious as the Seventh Doctor. Like Susan in Dalek Empire, there’s a morally ambiguous side to his character which makes him far more interesting. A few scenes set in the far future, with two people pondering Kalendorf’s legacy through the clouded lens of hindsight, prime us to expect something terrible.

The audio ends on a strong cliffhanger. We may about to plunge into epic battle, but key moments still hinge on the personal. It all comes down to a question of trust.

The acting is engaging, as usual, apart perhaps from Morli who didn’t quite grab me. (Maybe because I’m having to concentrate to understand her.) Kudos to Gareth Thomas’ brilliantly mercurial performance, switching from commanding to glib to compassionate to ruthless, with rare flashes of humour.

I can’t believe that Kalendorf has turned traitor, because we know how much it rankled him to serve the Daleks back in Dalek Empire. He’s been looking for a chance to redeem himself ever since. But Mirana’s comments about collateral damage sound prescient: he’s willing to sacrifice a great many people to win. He sticks to his plan, even when his remaining forces are about to be slaughtered. Kalendorf’s fatalistic laughter when he flees the disaster seems a little callous. No wonder Alby had doubts. What is Kalendorf up to?

He said he was very much looking forward to seeing Mentor in person. I suppose that will be the final showdown?

Morli’s actions, by contrast, are too telegraphed in advance, sapping any element of surprise. I was wrong about her incubating a Dalek-creature, but otherwise she acted about as expected. I did like her creepy conversation with Suz where she’s channelling for Mentor. Suz is disturbingly passive, ready to let Morli finish her off. It’s not like Susan hasn’t been ready to sacrifice herself before; it’s just harder with Alby there.

Dalek agent count: Pellan, Mirana, Tanlee, Morli. Even Suz, although Alby is trying not to think about her predicament. No wonder he’s so ready to believe that Kalendorf’s gone over to the Daleks, too.  To be fair, all indications are that Kalendorf has sold out, from the future historians looking back to Susan’s own sudden horror when he touches her mind. What did he show her?

There’s not much to be said about the romance storyline, but I do appreciate that Alby’s the one to whisper, “Hold me.”

I’m also worried about Herrick. Was he Varga-fied? I can’t believe Captain Mirana is dead, but I’m afraid Jeremy James may have to play someone else now.

As for the cliffhanger, I kept hearing Blake’s voice in my head from so many years ago: “Avon, for what it is worth, I have always trusted you. Right from the beginning.” Not that Alby is like Avon or has a close rapport with Kalendorf, but both arcs come down to a question of trust, and they both end with gunshots. Luckily, this is part 3, so I have some hope that they’re both alive. For now.