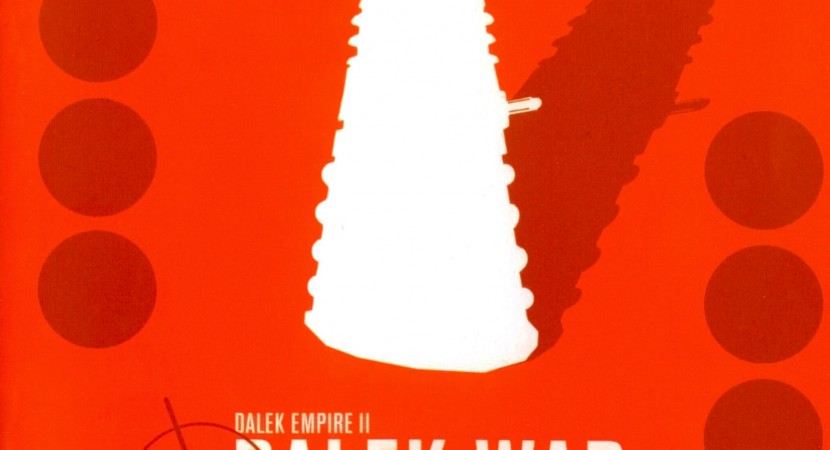 The second season of Dalek Empire includes enough backstory/context for new listeners, but you’ll miss out on some of the emotional resonance if you haven’t suffered through the first series along with our protagonists. Also, there’s major spoilers to what came before!

As this review will have as well.

One again, we have a retrospective framing device: the events have already happened, and two people in the distant future are pondering this Dalek War as a matter of history and mythology. Chapter One is an exposition-heavy episode, setting all the pieces and factions on the board, answering several burning questions from the last series, and launching new plot threads into motion. Answers are doled out piecemeal over the course of this story, maintaining our curiosity and keeping us interested via new plot and new developments.

“Even in victory, you never lose your caution.”
“This isn’t victory yet.” — Kalendorf

The war against the Daleks is not yet won, although this audio jumps forward several years from the last stopping point. Kalendorf is the general of the allied forces, driving back the Daleks from nearly all the planets they once held. His fleet is closing in on the Solar System to liberate Earth, the Daleks’ last stronghold where they are, as usual, up to something. Mirana and Alby are off on covert missions. Over the course of the story, we find out how they escaped the last cliffhanger and (some of) what happened to Suz.

Captain Mirana is finally settling in as another solid character, although she needs to work on her subterfuge skills. Kalendorf is wise and bold as ever, taking calculated risks and using his telepathy strategically when he needs to talk to the few he truly trusts. Alby, as always, is going off half-cocked and finding trouble. Their new allies are… fascinating, although we don’t know a lot about them yet. Mentor is an intriguing figure: benevolent, yet with a ruthless streak, almost like Susan had to be in the previous saga.

There is at least one powerful emotional moment, but for the most part this is chapter simply a prelude with a touch of intrigue. Still, it’s satisfying enough to listen to, preparing us for what’s to come.

The scene between Kalendorf and Mentor is initially quite puzzling. We could tell from the end of the last story that some “good Daleks” have arrived, but from the beginning she seems to be interfering with his ability to conduct his campaign. Why? What’s she hiding? What’s he hiding, that he has to send Alby and Mirana off on a covert mission? We soon find out, at least in part.

I have a feeling that Mirana’s duping of her first officer may come back to bite her. Series 1 of Dalek Empire made me paranoid: there always seems to be a Dalek mole somewhere. Of course, we’re told it’s Susan, and it may well be!

Sarah Mowat’s initial mistrust, anger at Alby, despair are the punch this story needs to keep Chapter One from being too much about moving pieces around on the board. I’m glad Suze finally brought up her parents, although she received no answer. They were why she stayed behind on Vega VI to get captured by the Daleks, so it would be nice to know whether she reached them or not.

Alby’s foray to the enemy spaceship is so, so predictable and in character. Were you shouting, “Alby, no!” when I was? He just has to get into terrible trouble. He has to. And it postpones his reunion with Susan just a little longer, which this story has been doing masterfully all along.