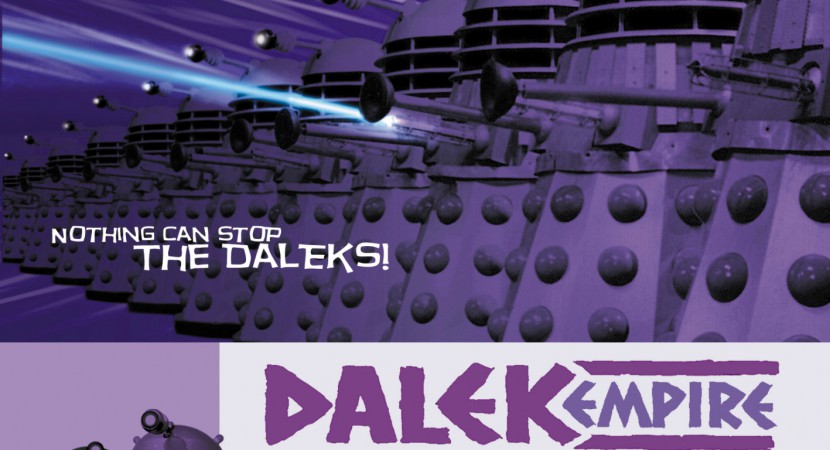 This story is in two (excellent) parts. In the first half, someone’s finally dishing out Answer Pie with Exposition Frosting. Then it’s time for the epic space battle that I was expecting in the first episode.

The first half deals with Susan and Alby. Despite my curmudgeonly resistance to most romantic plotlines, the echoes from previous conversations and more innocent times had me tearing up a bit. Blast it. Alby’s been through utter hell trying to find her, and Susan has been through even worse, so I’m glad Nick “Mr. Dalek” Briggs had sense enough to give them a Moment, sort of, before moving on. First, we learn more about what happened at the end of the previous story, answering our burning questions about what went down during the epic moment that the narrative dared to skip.. This scene is a calm before the storm, a necessary bit of personal reflection and explanation before they gird their swords and head to war. Not that it can stay calm for very long. There’s a nice little reveal at the end of this which ramps up the tension and action in preparation for the second half.

“What would you have me do? Organise another galaxy-wide broadcast? ‘Hello, everyone, it’s all over! Time to follow Alby Brook’s noble example and get drunk!'” — Kalendorf

Our heroes still don’t know exactly what Project Infinity is, or how anything could be powerful enough to give its users ultimate power over the entire universe, but yes, it really is that bad. Many Doctor Who stories have tried to propose a premise for universal domination or destruction, but it’s often a rather flimsy pretext. Not this time. That means that our surviving heroes (yes, once again I’m avoiding spoilers in case someone coasts in here who hasn’t heard part 3) must race to beat the Daleks to the base for Project Infinity at the far edge of the universe. Naturally, the Daleks have a head start, and it’s going to come down to a firefight. Also, this was written and acted partly by people well-versed in Blake’s 7, a franchise where you can’t be sure  that Good Will Prevail. Without the Doctor around* to stack the odds, that uncertainty is even greater.

Big Finish had already warmed up in staging battle scenes with The Apocalypse Element, Time of the Daleks and so on, and this time I think they found a winning formula. Sometimes audio gets bogged down in too many explosions, screams, and yells like “Look out!” This time, Nick Briggs  found a clever and unobtrusive way to have someone describing the battle’s progress without  stage directions being shoved down our throats. It’s exciting and engrossing, reminding me a little of the battles in Star Wars IV-VI with squads and coordinated attacks. Tactics! Of course, there’s also Daleks shooting things, EX-TERM-I-NATE, and all the rest that Dalek aficionados come to expect.

It’s worth remembering that fans had last seen the Daleks in action on TV over ten years earlier, with no prospect of ever seeing them onscreen again. So this audio is a gift.

But before the battle can bog us down too much, there’s Project Infinity to deal with— finally— and a few good plot twists to leave us dangling with a cliffhanger. Nope. It’s not over. You’ll have to shell out for Empire II. I did, and I’m looking forward to it.

Augh! Nice triple cliffhanger, between the Daleks’ rude surprise with the “neutralise” faction— not entirely unexpected, that some Daleks would be different— Tanlee’s betrayal, and the inevitable “Susan’s body was never found” raising an alarming possibility. Poor Alby. I’m not sure why the rest of Kalendorf’s considerable forces didn’t engage with the Daleks somehow when the Emperor beamed down, but then this already had a hell of a lot packed into seventy minutes.

Susan: brilliant explanation for why that old woman narrator at the beginning described events in first person sometimes, third at other times. It was really a very touching scene, and I loved the pickles. I also loved hearing Susan’s  fierce Death to the Daleks speech. Sarah Mowat pulled it off convincingly and sympathetically, redeeming the character without ever making her soft. That order to kill Kalendorf if he tried to interfere, the only way she could ensure he wouldn’t, was startlingly ruthless and a calculated gamble. She knew he wouldn’t be needed once she was dead. She’d already caused her technicians to be killed for debugging her office. So that was quite a gamble. But it worked, because now the surviving anti-Dalek forces have a commander to fill the gap left in Tanlee’s absence.

The Seer’s gentle laughter letting younger Susan shine through was a bit of magic in an otherwise very bleak story. I hope the Seer/Susan will show up again. I liked Susan, despite all her less admirable moments, and I’m glad she went out as a hero. Although of course the end of the audio warns us that her body is in the Daleks’ clutches now.

The use of unwitting Dalek agents telepathically controlled through implants is a great conceit in this story, used sparingly but to good effect. The moment Pellan was eliminated, the Daleks dispatched Police Officer Marina under the ludicrous pretense of trying to bust Alby for smuggling violations in the middle of a war. There’s many, many quotes hinting at Mirana’s covert mission in the previous episode, from the barkeep saying there’s Dalek replicants about to Alby wondering how the Daleks realised he was listening in. I was suspicious, but then the story would move on and I’d get distracted. The final clue shouldn’ve been Marina joking about becoming communications officer— no one else wanted the job— when that’s exactly how Alby’s Roboman friend Pellan betrayed Gouria to the Daleks. Control of communications has been absolutely vital in this series, which is a clever way of exploiting the audio medium. Marina serving as a human tactical display during the battle was great. I’m glad she’s come to her senses. With Susan out of the picture, it could have become a boys-only main cast during the Dalek showdown.

Also, once again, I need to pause a moment to admire Gareth Thomas’ voice. Kalendorf is a great character, but I can’t imagine anyone else pulling him off with the same dignity and charisma.

And Jez Fielder seems to have settled in as a regular called Herrick, along with ten zillion extras, so now I can justifiably include him in the cast.