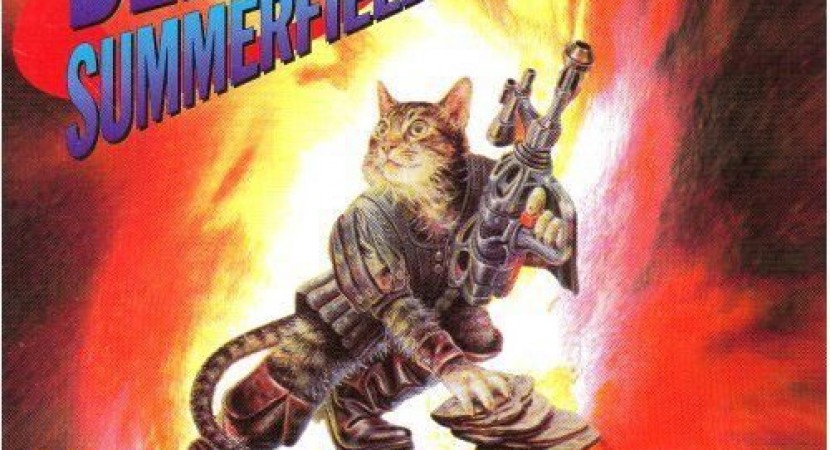 Oh, this ridiculous, silly farce of an audio, Big Finish’s very first release. It’s cheesy, it drags in the second half, and it’s haphazard and amateurish compared BF in its maturity, but I love it.

Bernice Summerfield, erstwhile 26th century archaeologist, is just heading back from a dig on an alien planet when the ship she’s on is attacked. Instead of certain doom, she and the crew are plunged into the madcap world of panto. Why? And what does her cat have to say about it?

As an American, I had to overcome a learning curve in order to appreciate Oh No It Isn’t! since the only remotely pantomime-like art I’ve ever seen is Monty Python’s Flying Circus and the clip of Peter Davison as Buttons:

Luckily, there’s enough in-story explanation in Oh No It Isn’t! for us aliens to catch on. After that, it’s just good fun, spoofing fantasy and scifi tropes much as Shrek took on Disney and Galaxy Quest took on Star Trek.

“The King’s balls get bigger every year.” — Wolsey the Cat

Lisa Bowerman (Benny) and Nicholas Courtney (Wolsey the cat) are why this story works, despite annoying aliens with bad voice modulation (nemesis of hard-of-hearing fans) and implausible plot. Now we know why Lara Croft dispensed with university grants and grad students. It’s a little surreal the way the story keeps trying to tie itself into knots to stuff Benny into an archetype, any archetype, as long as she’s still corralled within a defined role. I love her solution to her suitor problem.

The secondary characters are fairly thin— almost no backstory, and then they’re all stuffed into archetypes— but I appreciate the gender bending and trope busting along the way. Strangely enough, the cat gets the most thoughtful character arc in the story.

I could go on, but really, the reason to buy this audio is to listen to Lisa’s hilarious muttered asides and Nicholas Courtney cracking dick jokes.