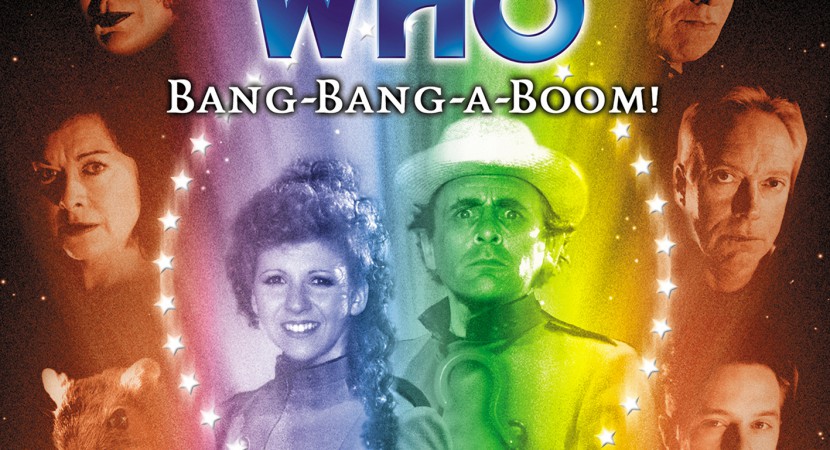 After spoofing itself with The One Doctor,  Big Finish followed up with Bang-a-Boom, a Galaxy Quest style roast of its campy counterpart on the other side of the pond. As well parodying Star Trek, it also pokrd gentle fun at Babylon 5 (“the last, best hope for peace”), with musical flourishes swiped from Christopher Franke.

I whooped and laughed. A lot.

So, we have ourselves a Babylon 5 gathering of humans and aliens aboard a space station called Dark Space Eight which is hosting a singing contest, and there’s murder in the air. The Doctor barges in and takes over as Captain Kirk. He even gets to play the womaniser that everyone remembers Kirk to be, even though he actually wasn’t.

I can’t offer my usual overview of plot and secondary characters, because they’re all superficial. There’s only enough plot for three episodes, and then Part 4 find various contrived and silly ways to fill out the alloted time (just like The Rapture, but since this is a farce, it’s more forgiveable). The musical cues are more over-the-top than the Queen soundtrack in Flash Gordon. I will say that it took me until part three to figure out the culprit in the murder mystery, so there is some depth hidden in this ball pit of a story.

Sylvester McCoy is allowed to indulge in lethal levels of oratory and mangled metaphors. I’m more tolerant of his buffoon-Doctor than some fans, since I actually enjoyed the lighthearted joy of his first surreal TV season. So if Greatest Show in the Galaxy and Paradise Towers didn’t appeal to you, this audio will bomb.

My main problem with this story is that the two female characters besides Mel are the worst SF female stereotypes one can possibly imagine, a bad Doctor Crusher and a bad Elaan of Troyius (played by Patricia Quinn/Magenta of Rocky Horror). Also, the “pits of Angvia” scene made me queasy.

The best part? THE CORRECT DOCTOR WHO THEME. At last.

TL;DR: It’s goofy, it’s shallow, and I actually enjoyed it (or perhaps 3/4ths of it), but the humor is so forced that it may not be to everyone’s taste.