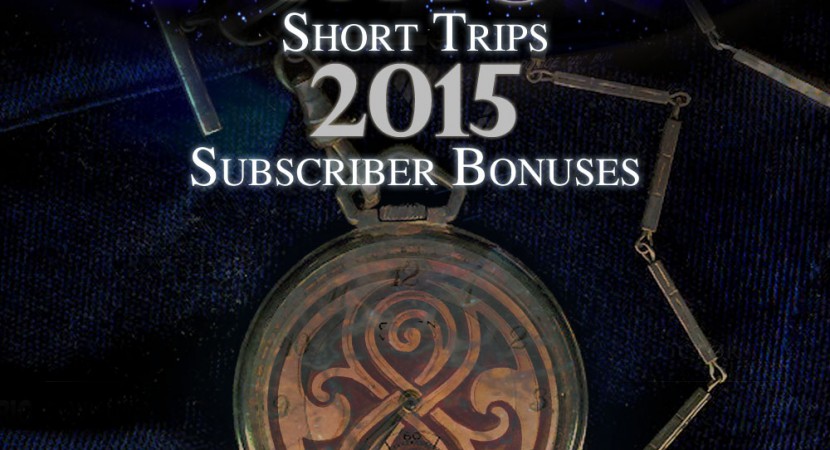 This time-traveling fairy tale pits the Fourth Doctor and Romana I against seven creepy Rumplestiltskins. It’s another story by Julian Richards, who seems to have a penchant for folklore and mythology (e.g. Shrine of Sorrows).

The Warren Legacy picks up on the classic motif of someone promising their firstborn child in exchange for a boon from some magical being. In the universe of Doctor Who, erasing someone from existence before they’re born creates a time paradox, and that’s where the Doctor and Romana come in.

This is one of those awkward time loop stories where the Doctor and his companion learn about what they did before they actually do it, and then have to go back in time and make it happen. Since this story is already borrowing other fairy tale elements, the concept of predestination is a more comfortable fit than usual.

“It’s rather a sparse portrait gallery, isn’t it?” asked the young lady as they reached the study.
“Yes,” chipped in the man in the ridiculous scarf, collapsing into the armchair Samuel had been sat in earlier. “And you do know one of them is a fake?”

All in all, it’s a clever little story, creating a modern fairy tale using ancient elements set in some distant future, at an Earth colony on another planet. It’s also a historical Doctor Who, since the Doctor and Romana must hop back in time to meet ancestors of their agreeable host, one Lord Samuel Warren.

Stephen Critchlow’s Tom Baker impersonation is, as usual, a joy to listen to, and it’s a pleasure to hear any Romana I story, even a brief one, since Mary Tamm was taken away too soon.

Subscriber Short Trips are bonus half-hour stories tossed in as perks with a Main Range subscription. This one is included with a subscription that overlaps Main Range #203 (Terror of the Sontarans) or Main Range #204 (Criss-Cross). Criss-Cross is a good story introducing companion Constance Clarke, so I recommend it!

The curious thing about The Warren Legacy is that the Governor who offers up his firstborn is never called to account for his callous condemnation of a fellow colonist. The Doctor and Romana never even learn about his cruelty. But the story resolves that thread indirectly, since the time paradox is finally broken when Warren recognises the Governor’s son Jonathan as his friend. In other words, love overcomes hate.

It sounds like the Doctor and Romana themselves are part of the Warren Legacy: the legend passed down through Warren’s family for generations. It’s a bit questionable inventing a bunch of characters who exist for the Doctor to save them, but our brief glimpses of various Warrens show them to be sympathetic characters. Also, once again in keeping with the fairy tale aspect of this adventure, there are six Warren ancestors, just as there are six segments, for the Doctor and Romana to seek. The seventh and last Warren tells them about his legacy to set their quest in motion, but he winds up saving himself.