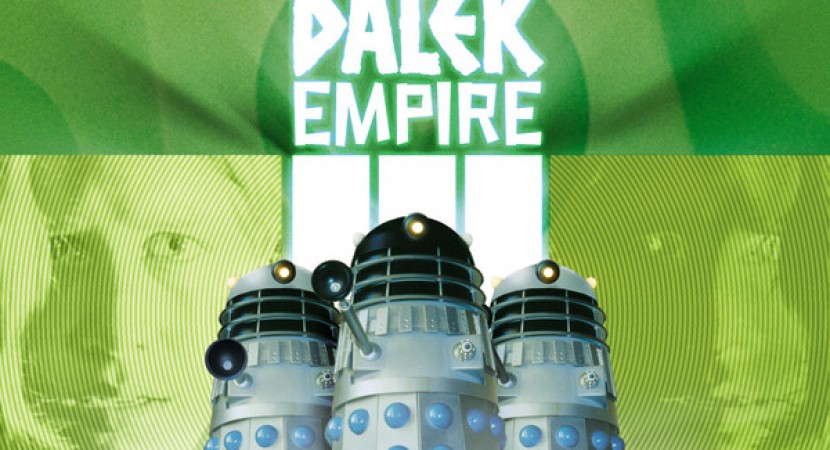 Another solid episode in the ongoing Dalek Empire saga, weaving together many disparate threads and lives who are knowingly or unknowingly part of the Daleks’ far-reaching web.

In this installment, there’s tasty twists in each of the main narrative threads established so far. Galenar (David Tennant), searching for evidence of what the Daleks are really up to, lets slip some of his own mysterious past. The surviving Graxis guardians struggle to escape a Dalek taskforce bent on reshaping the world they once defended. And Galactic Union security chief Selestru and his friend Siy Tarkov, survivor of a debilitating plague, issue dire warnings taht fall on deaf ears. Together with Siy’s daughter, they will take brave and perhaps foolhardy measures to seek the evidence the Galactic Union refuses to take seriously.

Things are moving along at a lively clip at this story, jumping from one group of far-flung characters to the next. We can begin to see the shape of the avalanche as pebbles begin to roll. Secrets and surprises keep us on our toes. And, since this is a sequel from the excellent Dalek Empire 1 & 2, I can’t help sitting up a little straighter whenever we hear an echo of Susan Mendes’ voice. She still has a role to play, and it’s as ambiguous as ever.

The Survivors thought-provoking, maintaining an edge of high tension throughout as the characters we’ve come to know and care about each face an ordeal and setback that seems insurmountable. The script raises just enough doubt that one could almost believe, maybe this time, the Daleks are acting as a force for good and not lying through their suckers about what their true intentions are. Once again, a  major part of the drama stems from the fact that we’re privy to what’s happening in many places, and we know the Daleks better than any of the characters caught up in their machinations.

“His name is Galanar, and he’s much more than just an agent.” — Selestru

Even the framing device for this story, memories told as an extended flashback, yields a surprising twist in this audio. Galenar is the narrator, so my initial assumption wasthat he was relating these events long after everything was over to a sympathetic friend. I should have remembered from Dalek Empire 1 not to take anything for granted.

It’s a very well-crafted story. In fact, this is really where the wheels begin to turn. As writer/director Nick Briggs notes in the interviews, he’d originally meant to start the story more or less here, but he wound up exploring the characters in more depth in the first two audios, letting us see them in the frying pan before he throws them into the fire.

Because of the fact that there’s not really a unified, central, overarching lead character and main plot, but rather three or four strands of different plots braided together, I rate this a 7— fun to listen to, but not quite with the power of some of the best Susan Mendes episodes… yet. But I certainly enjoyed it and can’t wait to hear what happens next.

Wow. I absolutely love the fact that, while Dalek Empire I was really the reminiscences of Susan Mendes’s soul, housed in the body of a sympathetic narrator, this time, it’s Galenar’s memories told to the remnants of Susan Mendes in the body of… the Dalek Supreme, her old fencing partner and nemesis? What’s happened to her? She speaks in two different voices, almost as if the “real” Suz is in there somewhere, as well as the Dalek Supreme. Because she was the “angel of mercy” once upon a time, I can’t help wondering if the Daleks have picked up some of her ruthless altruism. Although really, they haven’t; they’re as murderous as ever on Graxis. Then again, Susan learned Kalendorf’s ruthless “needs of the many outweigh the needs of the few” pragmatism.

I don’t think the Daleks are really trying to help; I think they’ve engineered the plague so that they can present a “cure” which will make they humans dependent on them for survival. But thanks to Susan’s presence, I have that nagging doubt.

Galanar himself turns out to be something quite different than expected. Who is he? And the twist with Siy Tarkov’s daughter turns her into a far more interesting character, brilliantly foreshadowed. “Amateur” indeed. She’s clearly dangerous. And Siy’s totally helpless in that bubble, vulnerable to whatever she’s planning. Unless, of course, it’s the Galactic Union agent that’s lying about her not being Siy’s daughter. Briggs is so good at doling out tantalising mysteries and clues, trusting an intelligent audience to keep up.

Meanwhile, the human drama with Kaymee, Saxton, the Wardens and Kaymee’s dad could be a great story all on its own. I hope “Snubby” and the primates are going to show up again. (Even if it would be oh-so-stereotypical if they turn out to have Native Wisdom and provide Kaymee with a cure for the NFS plague).