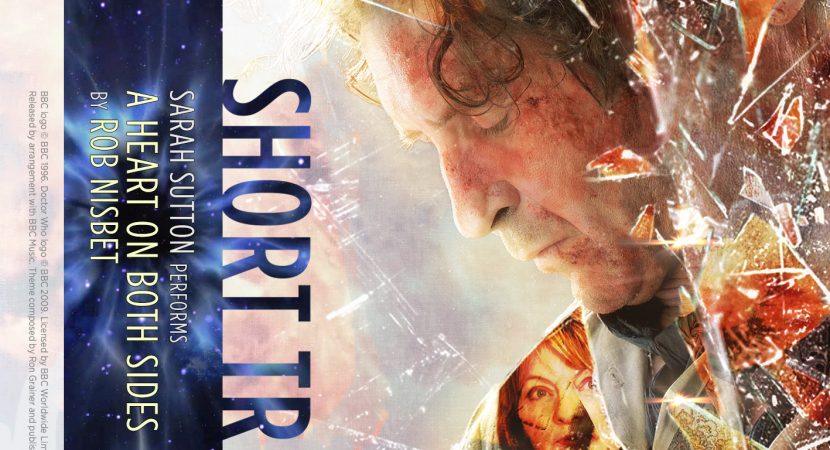 I can’t pretend to be unbiased, but this brief, satisfying adventure shows why I’m so fond of Nyssa and Sarah Sutton. It’s exactly the sort of thing I was hoping for when Big Finish first announced A Heart on Both Sides.

Somewhere in the fifty years of her life between Terminus and Cobwebs, Nyssa has acquired a beat-up medical ship to continue her work as Space Florence Nightingale. Many Nyssa fans have imagined her doing exactly that, so it’s satisfying to hear the concept enter canon. It’s a little sticky projecting the Time War back to the 36th century and having her hide it from the Fifth Doctor when they cross paths again, but it’s worth it for a good story.

As so often, Nyssa has landed in a dismal, grubby industrial complex utterly unlike the garden world where she was born. There she is unwittingly drawn into in the crossfire of a minor skirmish of the Time War. Someone is threatening this planet, her patients, and her life. In the process of uncovering that threat, she learns some uncomfortable truths about an old friend and his people.

“Nyssa may not be a Time Lord, but she has a heart on both sides.”

The Eighth Doctor puts in a clever cameo that’s entirely in keeping with his character. Sarah must have done her homework, just as she did in The Toy with Doctors 1-4; you can hear Paul’s voice coming through hers as she strives to capture his offhanded but earnest speaking style.

While it’s mostly a whodunnit and day-in-the-life for space medic Nyssa, there’s a few touching moments with the Doctor that will “tingle the molecules,” to borrow BF podcast lingo. Plenty of callbacks to the Fifth Doctor era justify the 80s theme music, despite Eight’s cameo and the darker, grittier milieu. There’s even a veiled reference to the Doctor’s peculiar habit of wearing celery.

A Heart on Both Sides  is not only a glimpse of Nyssa’s life beyond the TARDIS. It’s a glimpse of Eight trying to navigate the moral morass of the Time War. Small wonder that he gravitates towards one of the few souls he knows who’s even more ethical than he is.

I can’t believe I didn’t spot the Doctor lurking about until his “heart on both sides” comment. It’s not as if he was any more subtle than the Master in his choice of alias.

It’s touching how he’s looking after Nyssa, conscientiously avoiding knowledge of her future so he won’t inadvertently trap her in another grim fate. But he’s not acting simply as guardian angel. In a fun twist, he’s posing as her assistant. Nor is she limited to damsel-in-distress mode, thank goodness, since this is Big Finish. By the end of a forty minute story, they’ve each saved the other’s life twice.

I’m surprised there wasn’t a disarming-the-explosives scene to ratchet up the tension, with possibly an Earthshock callback, but I suppose 40 minutes is already pushing the limit of a “Short Trip.” Character was rightly the focus. (Oh, if only Paul could’ve put in a real cameo without giving the game away.) I’m also surprised that the Doctor lets the saboteur run off.

When this story was announced, I expected a scene with Nyssa bawling out the Doctor for the Time Lords’ role in the Time War. But she doesn’t have to; he’s already done a good enough job of that on his own. Anyway, she doesn’t recognise him. Which is really as it should be. Too much knowledge of his future selves would complicate the older!Nyssa arc even more. As it is, she suspects it’s him only as he’s leaving, when he deliberately mimics her kiss on Terminus.

A sweet moment which I couldn’t help interpreting as a parting here’s your fanservice, you silly gits gift to some longtime fans. Thanks, BF.

(Side note: if you’ve run across a fan-made audio starring a suspiciously Nyssa-like character running her own medical ship, A Heart on Both Sides has a quite different plot and feel, since it’s steeped in Who canon and features the Doctor. It need not be said that, despite Sarah’s best efforts to breathe life into that 2006 audio, the difference in quality is night and day between a fan project and a Big Finish production.)