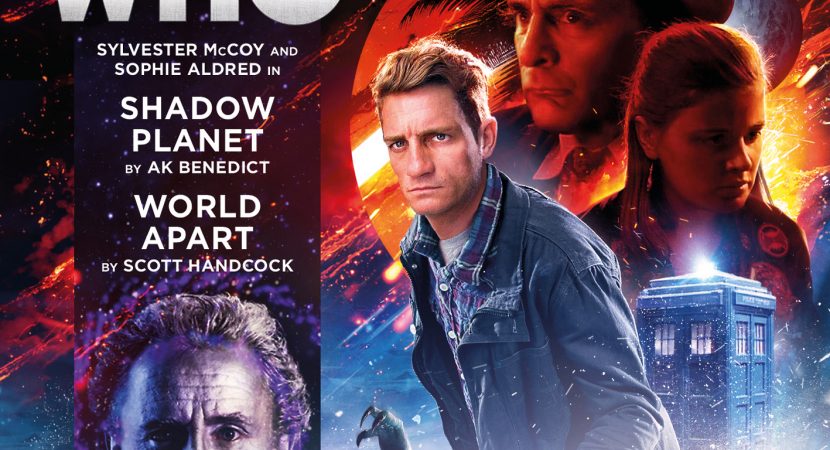 It’s called Planet Nirvana, but as Ace and Hex are about to discover, it’s Planet Hell.

Right from the start, you know this is going to be one of those audios: memorable and sharp-edged and somewhat experimental like Creatures of Beauty or Jubilee or Scherzo. It starts out conventionally enough (for Doctor Who), with a crash landing on an eerie and inhospitable world. Ace and the Doctor are keen to explore, while Hex, still early in his travels with them, is not quite acclimated to the life of a space adventurer. Besides, he has something else on his mind.

Even when they first step out onto this unknown planet, there’s a sense of foreboding. The Doctor chooses to ignore subtle hints of foreshadowing, letting his curiosity get the better of him until it’s far too late.

Ace: You all right? You look like you’ve seen a ghost.
Hex: Seriously? After all the things we’ve seen, you think a ghost would scare me?
Ace: Fair point. But something’s rattled you.

If the last story had to set aside some potential character conflicts for plot, this one is pure, raw character drama under extraordinary circumstances. It’s especially revealing of the relationship between Ace and Hex. We see his early veiled crush on her, and her more big-sisterly feelings towards him. But they’ve got bigger things to worry about on this horrible planet.

Have a trailer (which covers both stories in this double header).

Ace takes charge brilliantly, employing all the lessons she’s learned from the Doctor— including lying— to look after Hex. It’s an unusual dynamic for SF, to have a young woman serving as a young man’s protector, without in any way belittling his lack of experience in an alien environment. His medical training comes in handy, too. Sophie and Philip sink their teeth into this script and sell it with some of their best performances.

As for the Doctor, as usual, I’m tiptoeing around spoilers. But this is definitely a test of Ace’s faith in him, and a test of Hex’s faith in both of them.

It reminds me of Protect and Survive, in that Ace and Hex face an ordeal without the Doctor’s guidance. But it’s not simply a repetition of that story in a more alien setting. It’s a desperate, vivid thriller that licks reality TV hollow.

If you’re an Ace & Hex fan, this is definitely an audio for you, as Dalek Soul was a gift for Five & Nyssa fans like me.

That coda scene with Ace confronting the Doctor packs a painful but satisfying emotional punch. It’s uncomfortably revealing that she’s accepted the Doctor manipulating her— almost like an abuse victim— but draws the line when he does it to Hex. She tries to defend Hex against everything the universe throws at them, but the most difficult task may be defending him against the Doctor, despite the fact that the Doctor is her friend.

The Doctor failed them. He failed to heed warning signs and leave in time (not unusual, but with particularly dire consequences), he failed to retrieve them for weeks and weeks, possibly months, and he failed them by putting the planet’s survival ahead of theirs, even knowing it would cost untold people’s lives. Other Doctors might’ve eliminated it, however reluctantly, as a menace to the universe.

And yet he didn’t fail his friends, in the end. He exiled himself within the TARDIS for decades until he could find a way to retrieve them. They had both given up on him, but he never gave up on them. And he had faith— not misplaced— that they’d take care of one another.

It was a touching irony that Ace lied to Hex to keep his spirits up, but later asked him to believe in her when he couldn’t believe her dream of the Doctor. I loved the fact that even while trying to keep them alive, she was also trying to help future travelers by making a record to keep up their spirits, and that, while she slept on the frozen sea, Hex apparently listened to the whole recording which she had hidden from him.

Since Ace doesn’t respond to Hex’s flirting, this is a rare example of a non-sexual male-female friendship. It’s the same sort of love that often exists between a Doctor and companion.

There’s something odd that’s unique about this story. It references Shadow Planet, which raised the question of what the Doctor’s shadow would be like. At the end of this story, the Doctor mutters that without his companions, it’s just him and the TARDIS… and his shadow. “Me and my shadow.”

That could be a pat closing line, but I wonder if he meant something more.

He describes planet Nirvana as a complex time-spanning entity that traverses the Vortex, coming out to snare unsuspecting humans and humanoid victims, carrying them off against their will, feeding on them; only a few make it out alive. He hints that the TARDIS and Nirvana have trouble occupying the same space and time (although they did so once) without shorting out the time differential. It’s almost as if Nirvana is a sinister reflection of the Doctor and who he is, what he does to his companions. Is Nirvana his shadow? Or perhaps the shadow of the TARDIS? Is that the real reason he was afraid to kill it?