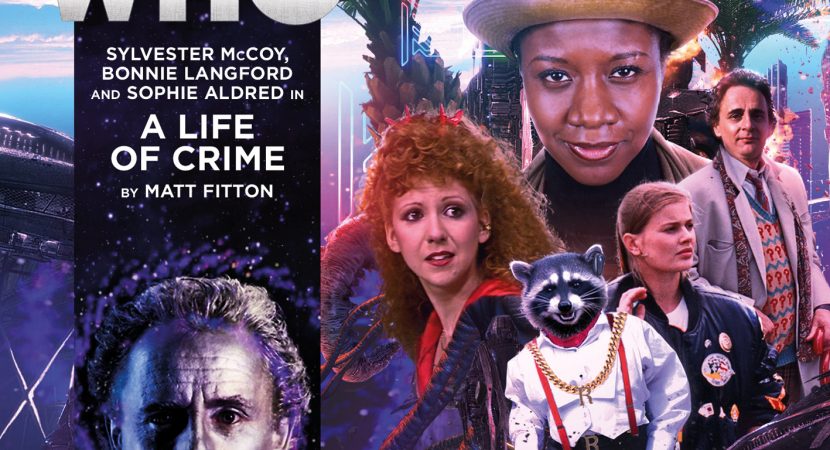 Strap on your seatbelts for a crazy heist. I hope you like Mel. After this story, how can you not?

The trailer barely scratches the surface of this fast-paced, more-twists-than-Mel’s-hair story. That clip doesn’t spoil much, so I won’t either. However, the unlikely cover art and madcap music give fair warning that we’re in for a playful installment of Doctor Who, at least for the first half of the story.

Ms. Melanie Bush, business partner of the nefarious Sabalom Glitz, has landed on a planet that seems to be a retirement community for successful scam artists. From the raccoon mayor to the half-cyborg Lefty, it’s populated by colourful and questionable characters. Funny how Mel seems right at home with them.

By not-so-sheer-coincidence, the Doctor and Ace arrive on Ricosta, aka Costa del Crime, a short time before Mel drops in. The Doctor believes the TARDIS brought them there to help someone. They may turn out to be the ones in need of help.

All the actors have an enormous amount of fun with this story, not least Ginny Holder, featured prominently on the cover art (no, not the raccoon). She pulls off an important role with aplomb. Sophie and Bonnie don’t have enough scenes together, but make the most of them. You’d never guess they haven’t worked together in thirty (ouch) years. Sylvester seems happy for a role that straddles his more serious Seven and the kindly Doctor whom Mel remembers. Lefty and the “new boy” are good for the tropes they fulfill. I’m not quite sure about the raccoon mayor, but in the context of farce, it works. (And I haven’t seen Galaxy Quest— blasphemy!— so I’m not sure whether it’s a homage). Once again, I have some difficulty understanding voice modulation of certain aliens, which detracts from a few scenes, but for the most part I was having too much fun to mind. I had quite a few chuckles while listening to this.

“Do you think Mel’s changed, Ace?”
Yes, she has. She’d never run off and nick a car. That’s usually my job.”

Two minor quibbles. One, the Doctor seems a little casual about abandoning people other than his friends, and two, the promising first half gives way to a more sober story with a somewhat ponderous Big Bad. I suppose it wouldn’t have been much of a story if it was nothing but hijinks for four episodes, but I’m sorry it didn’t draw them out a bit longer after Ace and Mel crossed paths.

At its core, this story is really a showcase to explore how Mel’s character might’ve developed with a bit more seasoning under her belt, away from the Doctor and out in the seedier side of the galaxy. I thoroughly enjoyed this extrapolation of her character’s skills and personality. Real people grow and change. How might Mel have changed? This story poses that question and offers some surprising answers. She and the Doctor have a few quality conversations that demonstrate once again how Big Finish adds more character depth to classic TV companions. The only regular who gets a bit shortchanged is Ace, but she still has plenty of scope for explosions, improvisation and sassy repartee.

I’m tentatively putting this at 8. It might be a 9 if not for the second half flagging slightly after the first half’s brilliance.

At first this story seems like a farce, and later on it falls back on a conventional “Doctor saves the planet” plot. But those are the surface layers. Beneath them, it’s dramatising a deeper philosphical problem: in what ways do people change, and in what ways do they remain fundamentally the same? How do others influence their life’s choices? What potentials and alternate futures do they contain? At first, it seems that Mel has fallen away from her ethical centre, but she shrewdly realises it’s the Doctor who’s drifted, possibly more than she has.

I and other fans have thought it was a shame that Mel and Ace overlapped so little, so we’re delighted to see this TARDIS team (a two-woman team, terribly rare in Doctor Who) get another chance to grow. I think Ace and Mel could come to complement one another even better than a brainy Trakenite and a brash Australian. BFFs? We’ll see. It’ll take a little hashing out, since the ending left Ace resentful of Mel’s return.  I do hope BF doesn’t play up the “girls jealous of the Doctor’s attentions” angle too much and cheat us of the chance to see Ace and Mel become friends.

One could argue that Matt Fitton chickened out by having Mel remain her old goody two-shoes self. But she’s not exactly the same, as this story takes pains to show: she’s more confident, more experienced, and sneakier. I just hope Mel fares better than older!Nyssa did. That’s the one problem with Big Finish picking up a classic companion’s story after they’ve run past TV continuity: it has a bad habit of ruining their life.

Enough about Mel. I’m still mulling over the Doctor leaving various NPCs to die in the bank vault. Sucks not to be a friend of Seven, doesn’t it?

I hope “Gloria” turns up again. She made an almost convincing Doctor. Almost. I loved the fact that Mel immediately saw through her, well before Gloria blew it with “reincarnation.” (Bonnie did a good job of conveying Mel playing along, hinting at her suspicious just enough to make it clear that yes, she knew she was being taken for a ride.)

The Speravores dealing in futures and devouring futures were an interesting concept, if a bit far-fetched. I liked the Doctor being forced to save them in order to keep an economic disaster from ruining countless lives and jobs. For those not drilled in Latin, Spera[re] = to hope, expect.

In the interview extras, Sophie speculates about where this audio falls in Ace’s timeline. Maddeningly, Matt Fitton dodges the question and talks about Mel’s timeline instead. That’s not the issue, Matt! Here’s the question: is this pre-Hex-Ace or post-Hex-Ace?  Before or after she becomes a special ops space marine?

This Ace sounds a little more innocent, happy-go-lucky, and impetuous than the one Hex met. However, I’ve already gotten tripped up by arguing that The Genocide Machine predated The Fearmonger based on Ace’s level of expertise and the “kinder, softer” Seven versus the later Machiavelli. So I’m not sure.

ETA: Aha. I haven’t heard You Are the Daleks yet, but apparently there’s a link in that story showing it directly precedes this one. And it’s post-Hex.