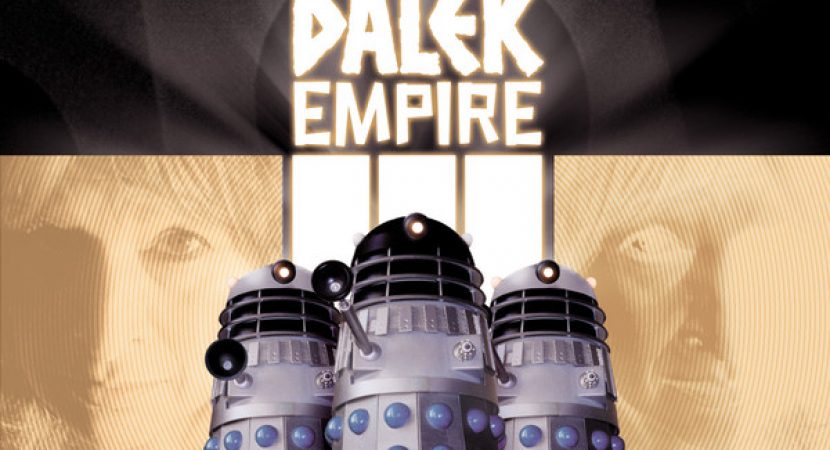 Ouch. Dalek Empire 3 ends with a bang or a whimper, depending on one’s interpretation.

Now I can finally put up the trailer, which has mild spoilers for Dalek Empire Series 1-3.

The final episode of Dalek Empire 3 takes place en route to the planet Velyshaa. The Wardens, together with their newfound allies, are hoping to obtain evidence which will convince the galaxy the Dalek threat is real and gather clues on how they were defeated in the last war. The Daleks want that same information in order to eliminate their vulnerabilities.

In the end, of course, it comes to a dramatic showdown between the Wardens and the Daleks on Velyshaa, the final resting place of the greatest warrior from the last Dalek war.

Just as the lead characters in Dalek Empire III were scattered for most of the series, they’re separated during the climax, so they all have different notions of what the end is. Was the mission accomplished? Have the Daleks won? All along, this series has played with the tension between the main characters’ ignorance and the audience’s knowledge of the Daleks. The conclusion retains that ambiguity.

“We should only be scared of the unknown, Dan. And we know what’s going to happen here.” — Commander Frey Saxton

I’m torn about this story. On the one hand, it pulls all the threads together… almost… even if we’re the only ones who see the big picture. There’s an emotional mix of action, desperation, courage, loyalty, and even snatches of humour. The Graxis Wardens prove their mettle and bravery. Siy Tarkov, Elaria, and Galanar wrap up their complicated and tragic history. And we finally learn the identity of Galanar’s mysterious listener, to whom he’s been telling this entire story when the battle’s over.

On the other hand, I have mixed feelings about this episode as a conclusion, with its jerky rush of epic battle, outstanding bravery, highly-charged conversations hinging on trust and mistrust, and passionate, profound speeches by Galanar and Siy. The latter seem to be struggling to give the series meaning despite the messy and abrupt ending. There’s also one nagging loose end that I wish had been addressed more fully.

In the final wash, Dalek Empire season 3 took longer to build momentum than the previous two, and its ending is more uncertain. Yet it’s still Dalek Empire, compelling and engaging, offering some wonderfully human moments, posing uncomfortable ethical questions which it refuses to resolve completely. Both the directing and acting are superb. Once again, it’s a good cast of characters. Commander Saxton, in particular, is something there just isn’t enough of in SF: a charismatic battlefield commander who happens to be an old woman.

And of course it’s a joy to hear David Tennant playing a proto-Doctor character, irrepressible and brave and quirky and angry and decent, expressing more humanity than most of the humans around him. I know he had a great deal of other work by this point, but I can’t help thinking that he was cast as the Doctor partly because many in Cardiff had worked on Big Finish and knew what he was capable of.

So, what next? Unlike Dalek Empire I and II, the cliffhanger gives us almost no sense of what’s to come.  The next series didn’t come out until 2007, by which time David Tennant was no longer available. ]Nevertheless, I’m chafing to hear what happens next. At the rate my Big Finish Listen-o-thon is going, it may be a year or so until I find out.

To some extent, Dalek Empire III repeats what came before. As with Project Infinity, the Daleks head to a remote world to find information about how other Daleks won or lost that will make them invincible, while the humans are going there for the same reason. Dalek Empire III is basically a data recovery mission to regain the records that Siy already collected in Series 2. Which may be one reason it feels a little less momentous.

I couldn’t help thinking that all the information the Wardens and Galanar had collected on Graxis and Scalanis would have been sufficient to convince the Galactic Union without the suicide mission to Velyshaa. After all, Selestru’s friend was already convinced by midway through this story.

When I said that this episode pulls together “almost” all the threads, the one loose and I’m pining after is Kaymee’s story. She was built up to be such an appealling character that I honestly thought she was the lead. I expected her former commander would meet her again, perhaps tragically, or that she would have some part to play in the finale.  Yet she turned out to be a strangely passive character whose storyline fizzled away to nothing.

I kept expecting Kaymee, Galanar, or even the telepathic imprint of Kalendorf on Velyshaa to unlock the latent personality of Susan Mendes in the Dalek Supreme. I did like the fact, as I observed in an earlier episode, that Galenar, a human with a Dalek mental implant, wound up telling his story to the Dalek Supreme with Susan implanted in its mind.

Also, I appreciate the triple tragedy at the end. Elaria was in such a state of despair and self-revulsion that she actually saved the galaxy, but goaded Galenar into killing her. The Dalek Supreme told Siy that the transmission was sent, but he never had a chance to reconcile with Elaria (not that he seemed inclined to do so) or tell Galanar they had succeeded. Even their mission’s success gave Siy no comfort, since he feared that the humans would become like Daleks in order to defeat them (see Jubilee). Galanar lost hope that their mission had succeeded, although he rallied enough to give a passionate speech in praise of human friendship, even as his friend was turning into a Dalek.

A grim note to end on, even for Big Finish, with every protagonist other than Selestru dead.