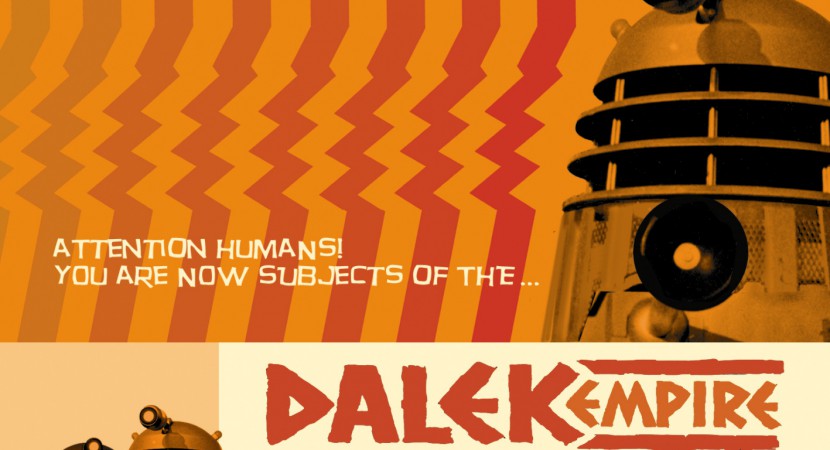 Susan Mendes sounds like another unsung hero of the expanded universe, not least because she’s not really a hero.

Dalek Empire came out years before new Who introduced the idea of the Time War between galactic superpowers. This conflict between the Daleks and the Earth Alliance in the 42nd century is decidedly more lopsided, evoking desperation and overwhelming odds similar to Blake’s 7’s rebellion and Babylon 5’s Shadow War. Caught smack dab at the beginning of this confrontation is one mouthy young scientist named Suz.

Confession: I’m absolutely the wrong target audience for Dalek Empire. Thanks to Earthshock and David Banks making “des-tr-oooo-oy” a four-syllable word, the Cybermen of the early 80s intimidated me far more than oversized, staircase-challenged salt cellars armed with a ceiling sprinkler and toilet plunger. I thought Daleks were cute, slightly comical bumper car menaces who were fun to snarl in a cardigan or beat up with a baseball bat. (Wait! No! Don’t close the window! I’ll repent!) Therefore, despite Nicholas Briggs’ magnificent voicework and efforts to instill Daleks with nuanced personalities, my first reaction to a Dalek on Big Finish cover art is not “Yay, DALEKS!” but “Ugh, not again.” I need a good story like Jubilee to help me over the hump.

However, I have a great deal of respect for Nicholas Briggs, and the Daleks are his babies. So, when I heard from a fellow non-Dalek-fan at Long Island Con that he actually enjoyed Dalek Empire and thought they were superb stories, I caved in. I had already purchased series 2 due to some sneaky sales during Big Finish’s 15th anniversary, and now I’ve purchased series 1.

“We recognise that human beings need hope to survive. If they survive, then they are productive.” — Dalek logic

So far, so good. I’ve only heard Invasion of the Daleks, which simply establishes the setting and key players, but I’m already invested in the characters. The audio does a good job of conveying the sheer helplessness and smallness of being a regular person caught up in a large-scale conflict, despite the fact that there are actually only three or four main characters apart from the Daleks:

I’m afraid of spoiling too much, so I’ll just reiterate that this audio shows why the Daleks are scary, apart from simply exterminating people. It goes back to the old idea of the Daleks as a metaphor for the Nazis, whose occupation of Europe and use of slave labour were overwhelming even if you weren’t unlucky enough to be Jewish, gay, etc. The human protagonists in this story offer a glimpse of what it’s like to be part of a conquered population. In some respects, it’s far scarier than running down corridors and being shot at. The Daleks aren’t anonymous machines of evil, either, because these are Nick Briggs’ Daleks— they include individuals, malevolent and intelligent personalities who can use sly negotiation as well as brute force. There’s a wily Dalek Supreme and the jovial, booming Emperor Dalek.

Also, I have a suspicion that none of the human protagonists are quite as simple and straightforward as they seem to be. All of them are hiding one secret or another, hints of which leak out before the end of the first episode.

I keep forgetting to mention soundscapes in my audios. This one is excellent, albeit minimalist: no theme music, and the incidental music is so unobtrusive that I barely noticed it. With all the spaceship thrums and viewscreen twangles and explosions and static and grating Dalek voices, it really doesn’t need any more.

One final note: while there’s a few Main Range audios that serve as prologue to Dalek Empire, you don’t have to have heard any of those stories to understand what’s going on here.

Dalek Empire 1.1 - Invasion of the Daleks

It turns out Kalendorf is one of the old Knights of Velyshaa. The Knights were introduced in Sirens of Time as a rival power defeated by the Earth Alliance in the 36th century. They were antagonists in that story, but it’s been centuries, and he seems an amiable-enough fellow now, if deeply pragmatic about their chances of survival. The Knights sound a bit Jedi-like: superior combat and espionage skills, telepathy. Although Kalendorf is in no fit shape to do much but provide a sounding board for Susan in the first story, I expect he may become her Obi-Wan mentor. Again, we shall see.

As I mentioned, there’s four Main Range audios leading up to this spinoff series. Confusingly, they were also grouped under the “Dalek Empire” label, since the events in those stories were prologue to this one.

In short, the Daleks gained information about humans and other species through the Kar-Charrat library in Genocide Machine, and established an alternate base of operations besides Skaro in The Apocalpyse Element, but I don’t understand how the other two stories tie into the Dalek Empire series. Perhaps it will become clear later.

Fans have been very busy with Dalek Empire, creating animated shorts using excerpts from the audio. For example: