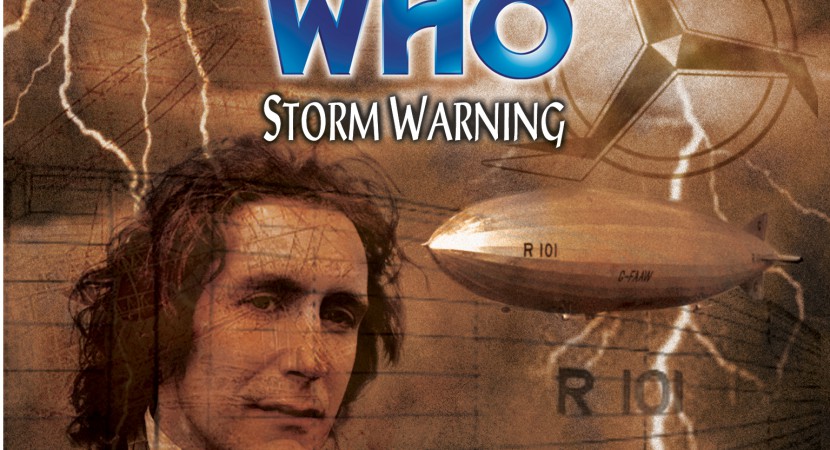 Storm Warning launches the Eighth Doctor’s audio adventures with wide-eyed enthusiasm and a generous helping of hot air. Like most pilots, it’s a modest beginning, with hints of greater things to come.

The Doctor finds himself aboard an early British airship, the R-101. There he meets the plucky Charley Pollard, self-styled “Edwardian adventuress,” who’s disguised herself as a cabin boy. It sounds like the start of a fantastic adventure. There’s just two problems. One, the airship has a secret mission never mentioned in the history books, which could prove far more momentous than the mere invention of air travel. Two, the Doctor knows the historical R-101 is destined to crash and burn in France during its maiden voyage.

When I first listened to this audio, I really enjoyed it. It has a warmth and breathless wonder that was leeched out of the late seasons of classic Who, and which sometimes gets lost in the epic angstfests of Big Finish. Paul McGann is a charming and personable Doctor, and India Fisher as Charley Pollard is a headstrong, likable companion who hits the ground (or sky) running. I also love historicals that inspire me to look up the history I missed in school.

The secondary characters in Storm Warning are great: a blustery old British aristocrat (Gareth Thomas, aka Blake of Blake’s 7), an earnest young engineer who’s trying to talk sense into his superiors, a stolid lower-class steward, a sinister foreign agent (?), and a mysterious passenger whose secret turns out to be worth the lives of everyone aboard.

“You feel that pounding in your heart, that tightness in the pit of your stomach, the blood rushing to your head? Do you know what that is? That’s adventure, the thrill and the fear and the joy of stepping into the unknown!” — The Doctor

The problem is that the drama is more simplistic and old-fashioned Doctor Who than some of the Big Finishes that preceded it. It reminds me that the show used to be primarily aimed at children and young teens. Also, there’s just too much talk talk talk. At first, the Doctor’s talking to himself because he doesn’t have a companion, but he’s still making pretty speeches later, in the middle of action sequences where protagonists and villains alike politely wait for him to finish his meta-commentary. Sometimes, Paul McGann sounds like he’s in theatre, not a TV dramatisation, declaiming to the audience in the back row. No wonder one exasperated extra complains he’s a windbag.

All in all, it’s a good yarn with minor blemishes, but he’ll be better in future stories. It’s probably better not to skip it, however, since this story is vitally important for Charley’s arc.

I have one real beef with this story: the lengths the Doctor will go to defend the Web of Time. It’s true that the Doctor varies from incarnation to incarnation, and in some lifetimes, he’s more ruthless than others. But Eight has so far given every indication that he’s going to be one of the most soft-natured Doctors. It’s one thing for him to say that he can’t go back and change the past to rescue a companion who’s already dead. It’s another thing to have him decide to kill a companion in order to restore the timeline to its proper course. There is a moment at the end of Storm Warning when he’s steeling himself to do exactly that.

It’s a minor quibble, but I don’t buy it. Inconsistent as the Doctor is, there’s a few lines I don’t htink he’d cross.

Production code 8B indicates it’s the second drama to feature Paul McGann as the Eighth Doctor, after the movie. However, it’s not right after the movie. There’s at least some book/comics companions in the gap. More importantly from an audio fan’s perspective, Mary Shelley has a few audio adventures in that stretch.

There’s an allusion to Mary at the very beginning of Storm Warning. Reading the preface to Frankenstein, the Doctor gets as far as “There were four of us,” and comments, “That’s wrong, for a start.” Tardis Wikia’s discussion of Mary’s Story notes that there was a decade-long running gag in Eight’s audio adventures that he was friends with Mary Shelley, before Big Finish finally deigned to record The Silver Turk, The Witch from the Well and Army of Death, coding them as 8A/AA through 8A/CC to make clear they predate Charley’s run.

In general, the Eighth Doctor adventures follow one after the other a little more cohesively than the other Doctors’ Main Range stories, which only very rarely refer back to the previous adventure. These are still stand-alone for now, but there’s more of a sense of character development, partly because the Eighth Doctor stories were usually released in mini-seasons of four serials over four months.