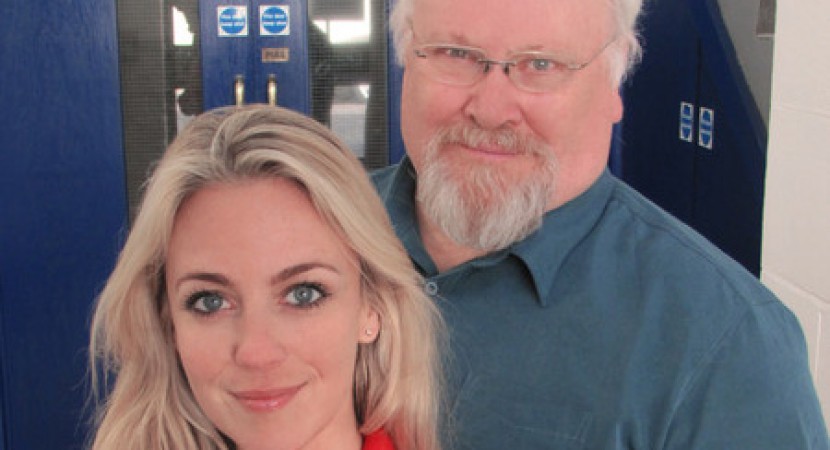 A spooky and surrealistic horror story spells the beginning of the end for the Sixth Doctor (the character, not the actor. Colin would never have agreed to record this arc if it meant he had to give up playing his beloved Sixie.)

End of the Line doubles as the introduction of a new companion, Constance Clarke. As with Mel back in the day, we meet her only after she’s been traveling with the Doctor for an undisclosed amount of time.

“What? Nonsense. My sense of direction may occasionally be eccentric, but it’s never concentric.”  — The Doctor

Secondary characters have to carry most of this psychological drama until the Doctor finally starts uncovering answers. They’re such ordinary people that they didn’t make a strong impression on me, at least until things started becoming disturbing, but the actors match Big Finish’s usual solid standards. (While it shouldn’t make a difference with audio, the scarcity of PoC actors is so great that I noticed Ony Uhiara’s striking scenes as Alice with satisfaction). The downside of ordinary characters is that they’re somewhat boring, even the one who turns out to be especially important to the plot. This problem was mostly erased on a re-listen, when I could appreciate the contrast between who they are and what they appear to be.

I’ve skipped ahead in my Big Finish listen-o-thon so I can hear Sixie’s regeneration story before I see Colin at (Re)Generation Con in a week in a half. Unfortunately, that means I’m hearing it directly after Arrangements of War. Dr. Smythe/Evelyn is a class act that’s difficult to follow. I like what I heard of Constance — capable, intelligent, a reference to Bletchley Park that suggests another nerd like Mel but less perky and more pragmatic — but she hasn’t grabbed me yet. There were some scenes between her and the Doctor which are supposed to be moving, but because I don’t yet know “Mrs. Clarke,” I wasn’t moved in the same way I might have been with, say, Peri. I’m sure Constance will grow on me, but I’m not sure it was a wise choice to use her in The Final Adventure.

At times I felt the story was made of recycled parts, from the quotes of iconic TV moments to plot contrivances almost on the order of new Who’s sonic screwdriver. Yet I loved the setting, and the horror elements were unique and visceral. Towards the end, there’s some huge reveals which raise the stakes and promise a great showdown by Part IV (as well as foreshadowing the Doctor’s tendency towards self-sacrifice for the greater good).

At least on a first listen, the whole thing didn’t quite gel for me. It’s a good overture, but I have high expectations for the Sixth Doctor’s last adventure. Maybe I’m thinking too much about “how will it all end?” for him and not focusing enough on this adventure for its own sake, since it’s almost totally stand-alone.

Sixth Doctor Boxset - The End of the Line

I stand by my reservations about Constance. I am fairly sure that when I listen to her audios, I’m going to like her, once she’s fully fleshed out as a character. But in this story, she just… isn’t. The Behind-the-Scenes interviews reveal that the writers of End of the Line were only briefed on her very late, after the script was written, and they left her as a capable but fairly generic companion.

I can’t help wishing they had used Peri, who has past associations with the Master and his surrogates. Now that would have been a showdown!  This story was released two months before The Widow’s Assassin, making it tricky to finesse Peri’s timeline, but Nicola was obviously available. So I think they should have found a way, then introduced Constance as a sort of “new beginnings” story in the month after this boxset was released. (It might have helped alert people who haven’t been paying attention that the Last Adventure was the Sixth Doctor’s last adventure, NOT Colin’s!)

As I alluded to above, I also had a little trouble with Keith Potter playing such an important role, when he’s really a bit… bland? for most of the story. It was a clever bit of plotting to find a way to include Ainley!Master, but it’s so hard to replace him. Finney did his best. But between his character and the introduction of a new companion, there was a lot of material we were supposed to take as familiar and have an emotional connection to even though we just don’t.

Norman also seemed like a less entertaining version of dear Hargreaves in Aquitaine written by the same authors, which I just listened to.

The funny thing is that the other bland character, Tim, also turns out to be an old enemy in disguise.  Should we mistrust all the unremarkable and boring characters in this story arc?

Even though Hillary had just revealed herself to be a killer, it troubled me that Doctor sends her out into the fog to be murdered by Keith. The Doctor guessed there was more to Keith that meets the eye and that Hillary was a victim of some kind of possession, so that felt a little callous, or at least careless.