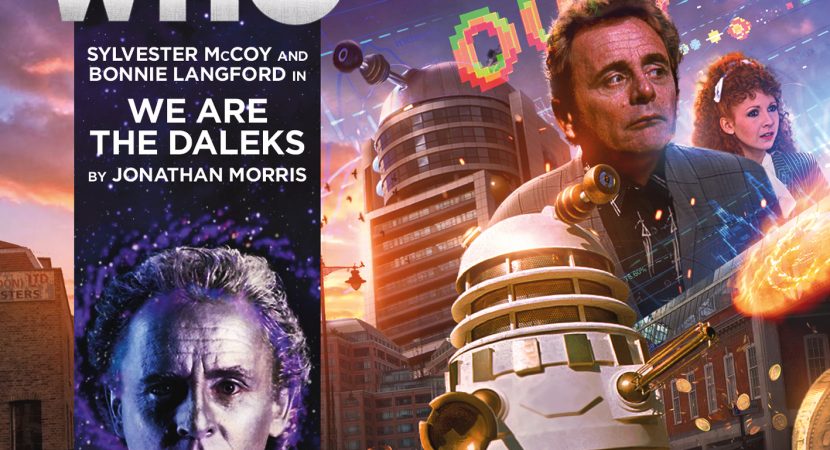 It’s all fun and games until someone starts waggling an eyestalk.

The Seventh Doctor brings Mel back to London 1987, a year after she left, to find there’s a suspiciously Dalek-shaped office tower looming over the skyline. 2+2 = 4. Mel and the Doctor split up to try and figure out what the Daleks are up to this time. As so often, they seem relatively harmless and even comical at first, making us wonder what their game is.

This is early Seventh Doctor, and he’s more of an improvisational meddler than the ruthless chessmaster he later becomes. In fact, there’s other parties playing a long game with more foresight and planning than he is. Since this is Big Finish rather than classic TV Who, Mel can work on her own and handle dangerous crises quite capably, putting her skills (computer programming and all-around decency) to good use.

On the surface, it’s a straightforward Doctor vs. Daleks adventure with move and countermove, the Daleks’ latest secret weapon, battles and explosions and Nick Briggs voicing scads of Daleks (Really, if the Doctor would just take out Nick Briggs, the universe would be a lot safer.) Except that this story weaves several more plot threads than was typical of classic Who, and it’s layered with several retro themes which turn out to be alarmingly contemporary.

While We Are the Daleks is meant as a jumping-off point for new listeners to Big Finish, it slips in a lot of elements from past Dalek stories. Parts of it reminded me of The Elite done better, and there’s some strong Evil of the Daleks callbacks. More importantly, just as Remembrance of the Daleks (released in 1988) was a nostalgia-tinged Dalek story set 25 years earlier in 1963, We Are the Daleks looks back to the 80s, which are now 25 years ago. Ouch.

Doctor: Tell me Alek, who are you working for?
Alek Zenos: Why do you ask?
Doctor: Because you’re either extremely clever or extremely stupid, and I’d quite like to know which.

The guest cast is up to BF standards. Nick is Nick (joking aside, I will never fail to be impressed that he turned Daleks from the bumbling battlebots I used to find rather tedious to the comic yet terrifying menaces I see them as today.) He’s joined by BF regulars Robbie Stevens and Lizzie Roper and a few other familiar, seasoned BF voices I haven’t bothered to look up. Angus Wright (Alek Zenos in this story, Magnus Greel in Butcher of Brisbane) is having another go at smarmy yet charismatic leader. Mary Conlon is settling into the Big Finish family as well, and I’ll be interested to hear from her again.

Sometimes I roll my eyes at the classic Who game of “how many things that happened in that year can we blame on the Doctor’s behind-the-scenes meddling?” Also, I’m a little ambivalent about BF elevating Mel from an ordinary computer programmer whom nerdy female fans could easily identify with in the 80s, into an exceptional super-hacker who leaves us in the dust. But it’s fun to have another genius on the team with Zoe and Nyssa.

Auuuugh! Another Doctor Who companion kinda-sorta married off to Angus Wright? What is it with this guy? 😉

Non-UK fans who may not catch the reference: here’s a one-minute YouTube vid of weathercaster Michael Fish’s infamous “Don’t worry, there isn’t [a hurricane]” followed by a few clips of the Hurricane of 1987.

I was a little more dubious about the idea that the (fictional) founder of the internet came up with the idea in 1987. By then, my friends were already sharing Who round-robin fanfic over modems and playing early text-based games on Usenet. But I will concede that there was about a five-year transition period as regional networks coalesced into a single web. The point is, the internet was already a work in progress by then and, I’m surprised that Mel wasn’t participating, or, at the least, aware of it.

Finally? Living in America right now with fascism going full-tilt ahead, it’s far, far more chilling hearing Celia the Politician assert unblushingly, “We Are the Daleks.” It has been a theme in Doctor Who before, but until now it felt more like fiction than reality. Well done. (Again, ouch.)