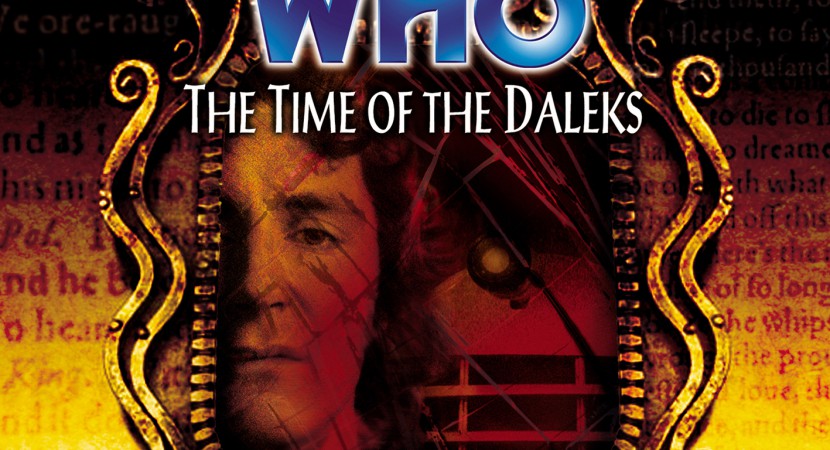 If you ever wanted to hear the Daleks declaiming Shakespeare, this is the audio for you. I, on the other hand, need an an excellent plot or juicy character moments to help me over my Dalek burnout (sorry, Nick). This one… didn’t quite succeed. The Shakespeare homage helped, and the Daleks were indeed more interesting and more chilling when they started talking in atypical ways, but the plot seemed to be held together with cellotape.

A benign dictator of New Britain, General Learman, has teamed up with Daleks to set her clocks and polish her mirrors and overthrow the Eurozone and help her catch some live performances of Shakespeare. There’s a whole lot of technobabble with portals and chronons and nuclear reactors and literary quotes and puns. As so often, threats to Charley and vulnerable parties force the Doctor to do things he wouldn’t otherwise to protect them. There’s a certain amount of kettle-and-a-ball-of-string cleverness, which is fun.

Learman’s intentions are opaque enough that it’s not clear whether she’s an antagonist or an ally, which is a good start. I wasn’t entirely sold on the resolution of her arc; her fate was dramatic, but her ulterior motives felt flimsy. The other secondary characters are fine as far as they go, but they aren’t all that well-used or well-defined.

My biggest quibble is that I couldn’t always follow what was going on. I sprained my suspension of disbelief on the tower of technobabble, I had to resort to peering at credits to figure out who was speaking at the beginning, and I got lost in all the timey-wimey and dashing from place to place. Did the Doctor and Charley accomplish else anything besides staying alive?

I will say that the tie-ins to past and future audios are clever. There was a random Dalek that dropped in for tea (or something) in Seasons of Fear, and now we find out why. Like many recent installments, Time of the Dalek is sowing seeds for the imminent crisis which Eight is trying his best not to see. However, nothing in this audio is integral to that storyline, so it’s safe to skip it. There’s a quick recap at the beginning of Neverland, if you’re curious what you missed.

The opening scene with the Daleks giving orders to their ship’s pilot is unintentionally confusing. A non-Dalek voice keeps chiming into their conversation  with apt quotes, so that it sounds like they’re talking to a Shakespeare-obsessed ally. They’re not. Nor is he a Dalek that’s turned into a human or a human that’s turned into a Dalek, both of which occur elsewhere in this story. He’s a character that’s part of the overall frame for this season of Eighth Doctor adventures, and they don’t even know he’s watching them from afar.

Also? I don’t blame Big Finish for creating two different origin stories for Shakespeare (this and The Kingmaker). However, I object to the paradox of having  Shakespeare learn to write by reading his own plays, cheapening his accomplishments. For that matter, it’s hard to believe that young Will would not be profoundly affected by his Dalek adventure. Surely there would’ve been a Dalek or two in The Tempest.